A tale of two cities is a name most fitting for this building. The Wexner Center for the Arts is an 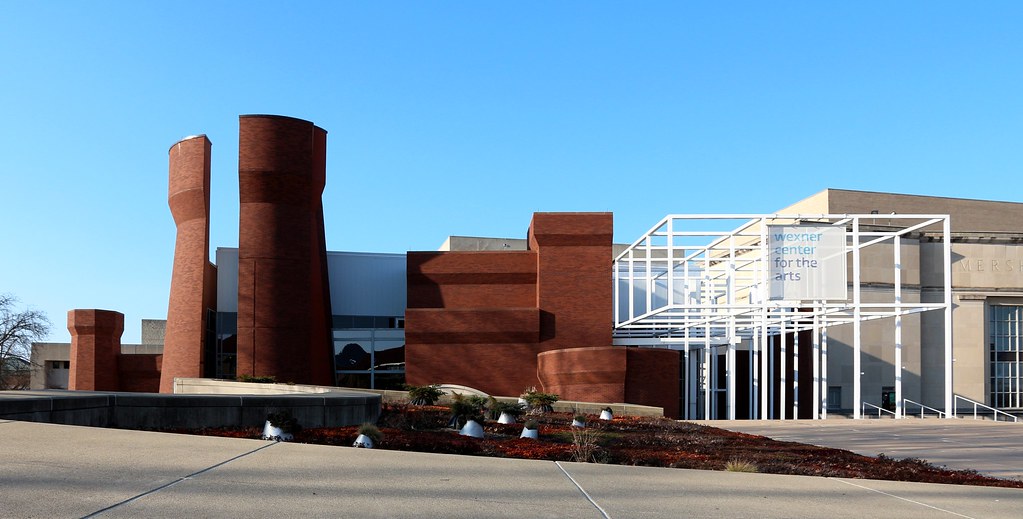 internationally known contemporary arts center at The Ohio State University. The Center shows many exhibitions, performances, and films along with multiple educational programs. The building houses galleries, performance spaces, a film video theater, a store and a cafe in an incredibly skillful way. The building is ultimately successful in its combination of architectural theory and practicality through the juxtaposition of overlaying grids as well as the capture of area combining both historic precedent with intellectual design. 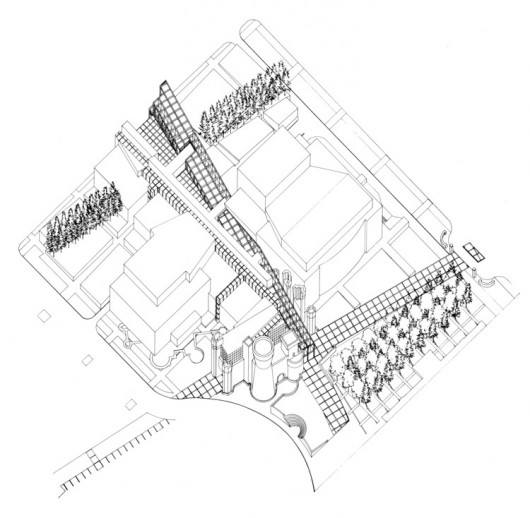 As one approaches the most striking qualities of the Wexner Center is the prevalence of grids; they define  and are exemplified by the site work, and help to allude  to multiple themes of connection. These connections include the super imposing of the City of Columbus grid over the Campus grid to connect the two. Eisenman’s rational for this was to unite scale by grafting the planning grids of the State of Ohio, the City of Columbus, and that of Ohio State University together (Eisenman and Graafland, 63). The original master plan for Ohio State University was designed by Frederic Olmstead in 1909 (Wikipedia, 1) and as a part of his plan, he rotated the primary grid of the campus 12.5° off of the Columbus grid to allow the campus to show its own identity. By the early 1980’s the campus had expanded to Olmstead’s grid and had met the City of Columbus grid, this point of meeting was where Eisenman placed the Wexner. The most obvious grid however is a 3D grid through the core of the building.

This 540-foot long “scaffolding” structure extrudes the planar grid systems into a three-dimensional datum. Exposed and partially open, it looks incomplete, emphasizing preconceptions of solid and void as through the deconstructive nature of the building. While this seam in the building functions as an axis of circulation, it plays a more important spatial role by projecting organization throughout the site referring back to use as a datum. The resulting relationships find expression in the surrounding structures and landscaping, such as Weigel Hall and Mershon Auditorium.

The Wexner center was ultimately conceived to capture a space that had long been unoccupied. Seen on the museum are a set of red brick turrets that clash with the modern image of the scaffolding. They allude to a medieval-style Armory that was located there prior to the museum and are a tribute to the prior building as it had historical significance on campus.

They are fragmented elements of history, split and carved in a way that identifies the importance of precedent far more than honors it. The various elements continue to add to the overall deconstructive element of the building, enforcing the scaffolding and the program of the building. The program or gallery spaces are unique as they are connected by one ramp. This allows users to experience first the art and on the way back down they can examine other elements such as the architecture. Showing how a space can be captured in a most unique way and is shown through Eisenman’s work in the Wexner.