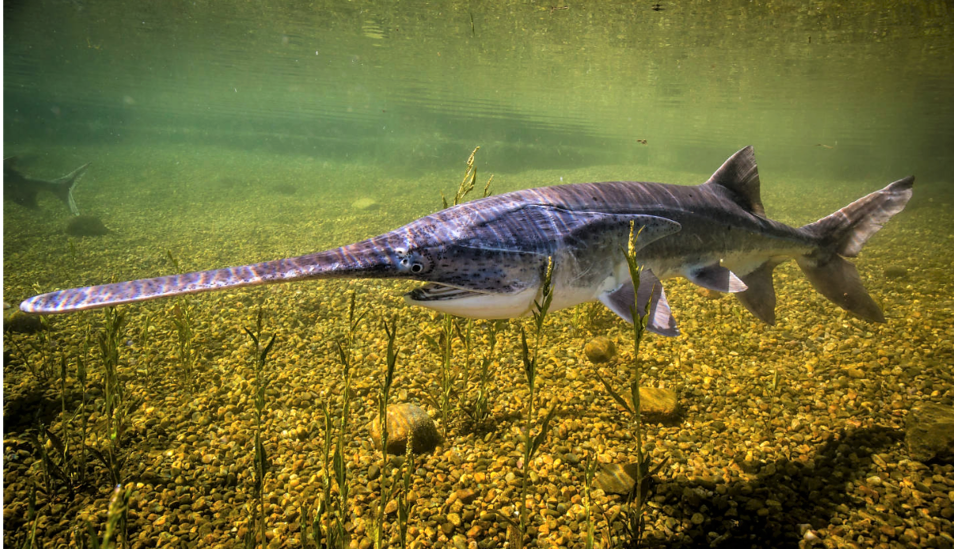 The American Paddlefish (Polyodon spathula) or spoonbill as they are often referred to due to their paddlelike snout, is a large and ancient fish that has survived relatively unchanged since the late cretaceous period around 68 million years ago when dinosaurs walked the earth. They can be found throughout North American in the Mississippi River Basin. While they are a protected and rare state threatened species in Ohio, they are found most commonly in Ohio River tributaries downstream of the first dams; particularly in the Scioto River south of Columbus (Rice and Zimmerman 2019). In Ohio, they can grow to a maximum size of 5′ and 184lbs, however fish ranging from 2-4′ and around 20-30lbs are much more common (Rice and Zimmerman 2019). The cause for their decline was attributed to increased turbidity, or suspended particles like clay and silt, and being cutoff from suitable spawning areas to reproduce due to the construction of dams (Rice and Zimmerman 2019). In order to understand why turbidity has impacted these fish so much and why their populations are beginning to rebound as water quality improvements t0 the rivers has been made, you must first understand how they feed.

Despite their massive size and tough exterior, these fish are filter feeders that prey mostly on small plankton crustaceans, which are small organisms that float freely in the water. You may be wondering how it is possible for the paddlefish to eat enough of these organisms to grow to such a large size. Luckily for the paddlefish, they are excellent filter feeders like Humpback Whales. Having been described by early naturalists as “A living plankton net” these fish have hundreds of gill rakers that form a tight mesh that collects plankton as they swim around with their large gaping mouths open as seen in Figure 2.

But what purpose does the paddle serve?

The paddle or rostrum was once thought to have been used to dig through the stream substrate foraging for food, but research has proven that it is actually an electro sensory organ covered in sensory pores (Figure 3) used by the paddlefish to detect the weak electrical currents plankton give off (Wilkens and Hofmann 2007). In a study published in 2007, researchers ran feeding experiments on juvenile paddlefish where they placed the paddlefish in dark tanks and witnessed them able to seek out single small crustaceans that were placed in the tank (Wilkens and Hofmann 2007). They also noted that they would avoid metallic objects in the tank, even in the dark, as this likely interfered with their perception of electrical currents which may also hint at a further impact locks and dams could have on paddlefish by disrupting their ability to navigate rivers and access spawning habitat after dams were constructed (Wilkens and Hofmann 2007). If paddlefish can locate food even in the dark or muddy waters, then why has increased turbidity impacted them so much? 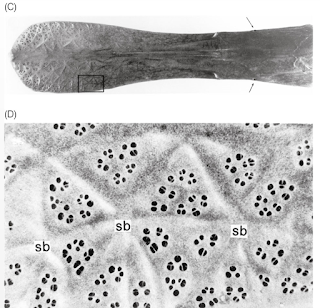 The issue with increased turbidity is largely due to their ability to finely filter feed. Some studies have shown that 50% of the gut content of some paddlefish was detritus (decomposing organic material like small leaves) and sand (Pyron et al 2019). Under highly turbid conditions, paddlefish gill rakers may become clogged with materials that are suspended in the water, making them unable to filter feed plankton effectively. In addition to not being able to filter feed as effectively, other studies have linked high turbidity to reduced growth of plankton species (Kirk and Gilbert 1990). Despite the paddlefish’s ability to find food solely using electroreception, they’d still struggle to find food as plankton growth can be reduced, leaving them less food in water with high turbidity.

At present, water quality in Ohio has been steadily improving after legislation like the Clean Water Act in 1972 and many fish species have since begun to bounce back after having been impacted by habitat and water quality degradation (Pyron et al 2019). As water quality continues to improve and many old and outdated dams are removed; granting these fish access to places to spawn, we can be hopeful that conservation efforts to protect this ancient Ohio fish will be successful and future paddlefish will be free to filter feed all they want.