Laura Mulvey begins “Visual Pleasure and Narrative Cinema” by stating her goal to “discover where and how the fascination of film is reinforced by preexisting patterns of fascination already at work within the individual subject and the social formations that have moulded him,” and promptly asserts that psychoanalytic theory is the proper “political weapon” necessary to complete this goal (711). She acknowledges the difficulty in challenging patriarchal structures when one has no choice but to use language that has been constructed by the self-same structures; however, she consciously chooses psychoanalysis—itself a crucial tool of patriarchy—as her framework in an attempt to “make a break by examining patriarchy with the tools it provides” (712).

Mulvey argues that mainstream Hollywood cinema exploits the audience’s unconscious erotic desires through a “skilled and satisfying manipulation of visual pleasure” (713). And the most prominent pleasure of cinema is scopophila—which includes both “pleasure in looking” (voyeurism) and “pleasure in being looked at” (exhibitionism); in each of these variants, the active watcher reduces the passive watched to an object and “subject[s] them to a controlling and curious gaze” (713). Mainstream cinema provides the perfect atmosphere for fulfilling scopophilic desires; the characters appear unaware that they are being watched and the dark theater contrasted with the light of the screen creates an illusion of separation between the viwer and the viewed. The screen becomes a window into an unsuspecting, private world; however, Mulvey explains, the screen is also like a mirror wherein the watcher recognizes himself. Like a child who recognizes his/her image in the mirror for the first time and in the process, uncovers his/her subjectivity, cinema allows us to at simultaneously escape our own subjectivity while also reinforcing it. So, the second main pleasure in cinema arises from narcissism. And the delicate balance between scopophilia and narcissism allows the audience to fulfill their laden desires while also remaining separate from them.

Finally, Mulvey explains that there are three “looks” in cinema: that of the camera filming the actors in real-time, that of the audience watching in the theater, and that of the characters looking at one another. Hollywood cinema, she claims, tends to disregard the first two looks—which are grounded time and space—and focus solely on the third in order to maintain a feeling of distance between the viewer and the events played out on screen. In focusing only on the third kind of look, these films ensure that they will never achieve “reality, obviousness, [or] truth” in favor of maintaining the “neurotic male ego” (721). Mulvey suggests that “alternative,” avant-garde cinema may be able to destabilize the male gaze. In order to do this, she claims, these films must emphasize the other two looks: of the camera (which will return the film to a particular space and time rather than appearing to be only a scocophilic dream) and of the viewer (which will destroy the illusion that he is merely an “invisible guest”) (722).

In this piece, Mulvey glosses over the fact that a film can have a female protagonist—in a footnote, she claims that the strength of these characters tends to be “more apparent than real” (716). How does the male gaze operate in a film like 4 Months where the narrative is moved forward by a female protagonist? Who are we being encouraged to identify with? Or, is this an example of the kind of “alternative” cinema that breaks free from the gaze? How do we conceive of the male gaze knowing that women tend to go to the movies more than men? Does the male gaze operate no matter who is in the audience? Can a woman watch something with a “male gaze?”—especially considering that women presumably don’t experience castration anxiety? While thinking about this piece I was reminded of Boyhood and how some of us gawked at the idea that “anyone” could identify with Mason—who is the ideal viewer of that film? And finally, while watching Lost in Translation, I found myself questioning whether or not Charlotte falls prey to the gaze—especially considering the opening shot that Erica discusses in her post. Mulvey claims that “conventional close-ups of legs … or a face … integrate into the narrative a different mode of eroticism. … One part of a fragmented body destroys … the illusion of depth demanded by the narrative, it gives flatness, the quality of a cut-out or icon rather than verisimilitude to the screen?” Does this opening shot merely play to the voyeuristic male gaze—especially since Charlotte is presumed to be completely alone in this moment? The shot was influenced by the paintings of John Kacere, so is Coppola providing commentary on the omnipresence of the male gaze? Is she “mak[ing] a break by examining patriarchy with the tools it provides” (712)? Or is she merely inviting the gaze—which, according to Mulvey, must be easy to do since “cinema builds the way [the female character] is to be looked at into the spectacle itself” (721). 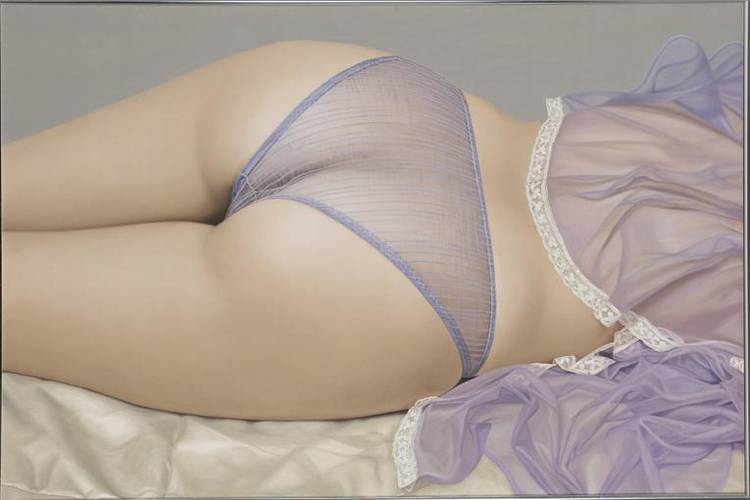 John Kacere’s Lorena 91
(Literally, all he does it paint butts.)