Since the beginning of post World War II urban landscapes in Germany, especially Berlin, have been restored, restructured, and redesigned. Manufacturing and industry were originally relocated outside of the city after the war, removing the middle class and leaving the marginalized to inhabit the urban area (Pugh 421). However, with the dawn of globalization, Berlin began to transform yet again, this time with a flux of upper and middle-class inhabitants. The effect of this was that the current residents could no longer afford the higher real-estate cost and increasing rent, and were displaced within the city, specifically the poor and working class. This gentrification was largely due to international corporations, who were responsible for the “increasingly uniform look to the city.” Berlin occupants witnessed this destruction of their past, and felt entirely neglected, considering they were unable to take part in the decision-making process that ultimately determined the character of their home. In response, tenants of these gentrified areas spoke out against urban transformation through large slogans, murals, and illustrations that strove for “visibility in an urban landscape” already “bursting with language and signs.” Graffiti represented an attempt to “attribute distinct features to a transformed urban space that otherwise” lacked identity. This form of protest is still highly active, as Berlin continues to rapidly globalize, gentrification continues. The picture below displays one of Berlin’s longest-lasting illegal graffiti texts: a sign that “declares Berlin’s urban renewal has fallen victim to commercialization.” Scrawled in giant letters, the building reads “Diese stadt ist aufgekauft,” or “this city is bought up” (Preece 130-37). 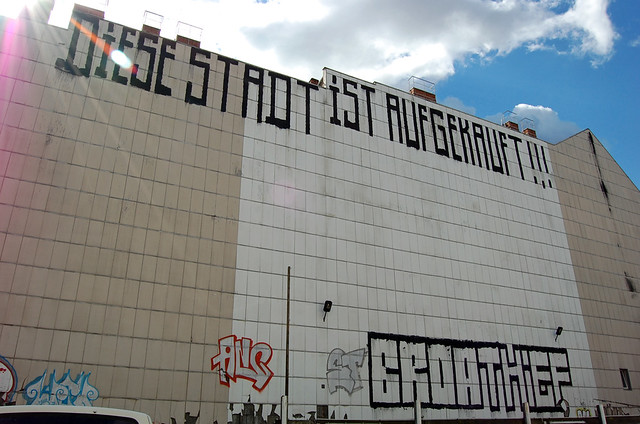