On Wednesday, March 22, 2017, the Office of Diversity, Inclusion, and Community Engagement featured speaker  Dr. Leigh Patel from Boston College in a celebration of women.

We also presented women from across our community with awards, who have proven their engagement and excellence with respect to equity, diversity, inclusion, and community engagement.

Please find the acceptance video of Rhonda Johnson, Education Director of the City of Columbus below

Without question, there remains an urgent need for institutions of higher education in the United States to take a proactive stance with regard to diversity, equity, and inclusion. This country and its many institutions have a devastating history with respect to racial oppression, religious persecution, discrimination, and systemic violence. Thus, schools and colleges of education, in particular, must take a critical, public stance against racism and in support of equitable, inclusive, anti-racist educational practices and spaces.

I invite you to read, “Diversity, Equity, and Inclusion: A Position Statement for Colleges of Education,” share it with your networks, and visit our Facebook page (EHE Office of Diversity, Inclusion & Community Engagement: OSU) to post specific action schools/colleges of education must take to truly engage in this important work. Read the statement and use this link to add your name, organization, and email to show support for it.

The conversations were just as important as they were emotional, difficult, and unfinished. Dr. Blackburn was kind enough to share a powerful written contribution, which lends itself to further conversations, thinking, and action. Please read and comment:

“As you heard in my introduction, much of my work has focused on LGBTQQ people, and as person who identifies as queer, violence against LGBTQQ people infuriates me, pains me, and, let’s be honest, scares me too. But as a white person, I cannot ignore that much of this violence is inflicted not just on queer bodies but also brown and black bodies.

Let’s bring this home to Ohio. Skye Mockabee was 26 years old when she was found dead, face down, bleeding from her mouth, in a parking lot in Cleveland on July 30th. Rae’Lynn Thomas was 28 years old when she was shot and killed by her mother’s ex-boyfriend, who said she was Satan, in Columbus less than 2 weeks later on August 10th. Both women were trans. Both were African American. Here. In Ohio.

But just as I am infuriated and pained, I am also afraid. Not because I believe the likelihood of this happening to me is like that of trans women of color or queer people of color. I know it is not. I am not scared for my life. Not in the same way. And it’s my job, as a white person, to know the difference.

It is my job, as a colleague, to figure out the times when I should stand up and be heard (not always leaving all of the hard talk up to women of color, for example), and when I should sit down, shut up, and listen. (I should say this is always a struggle for me; but it is my job to stay in the struggle.)

It is my job, as a teacher of LGBTQQ-themed literature, to teach people like Langston Hughes, Bayard Rustin, Audre Lorde, and Pat Parker. It is my job to read with students texts like Huey P. Newton’s speech to the Black Panthers about Women’s and Gay Liberation.

It is my job to find opportunities for acting in solidarity, to do the equivalent of Rapinoe, a gay white soccer player, taking a knee in solidarity with Kaepernick.

I know these acts are small, too small, but I also believe in the small acts. Small acts in which we join together in our fury, in which we feel but also sooth one another’s pain, and which we work together to counter the forces that cause pain. Small acts. Acts of love, respect, and solidarity.”

Faculty and staff showcased their artistic talents on Friday, April 22, for more than 50 Ohio State faculty, staff, students and Columbus community members who gathered to celebrate diversity and advocate for social justice through artistic expression.

Hosted on the Columbus campus by the College of Education and Human Ecology’s (EHE) Office of Diversity and Inclusion, the 2nd Annual “An Evening of Music, Poetry, Spoken Word and Art” celebrated National Poetry Month.

The event featured the following Ohio State faculty and staff who shared their creative contributions:

“We believe this event creates a forum for people to artistically express their ideas and viewpoints, share their feelings and engage in conversations,” said Dr. Valerie Kinloch, director of the EHE Office of Diversity and Inclusion and professor and associate chair of the Department of Teaching and Learning.

The EHE Office of Diversity and Inclusion develops, promotes and supports dynamic programming to encourage critical thinking about diversity, equity and inclusion—key areas of President Drake’s 2020 Vision for Ohio State. 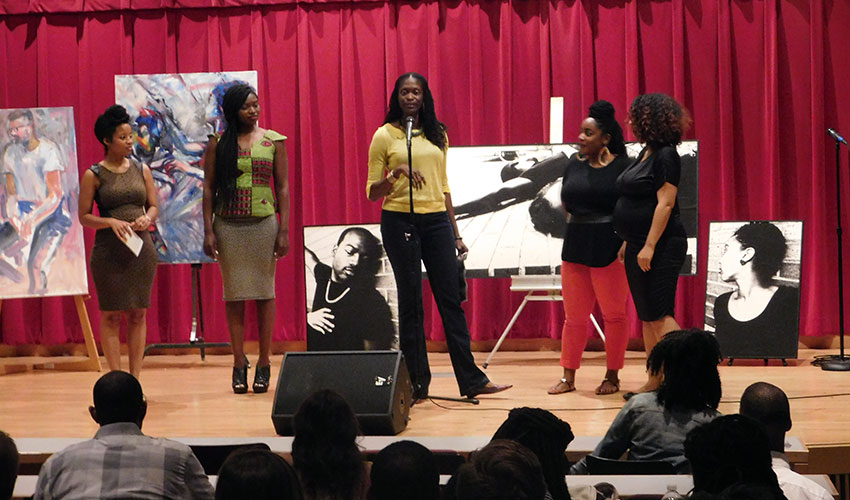 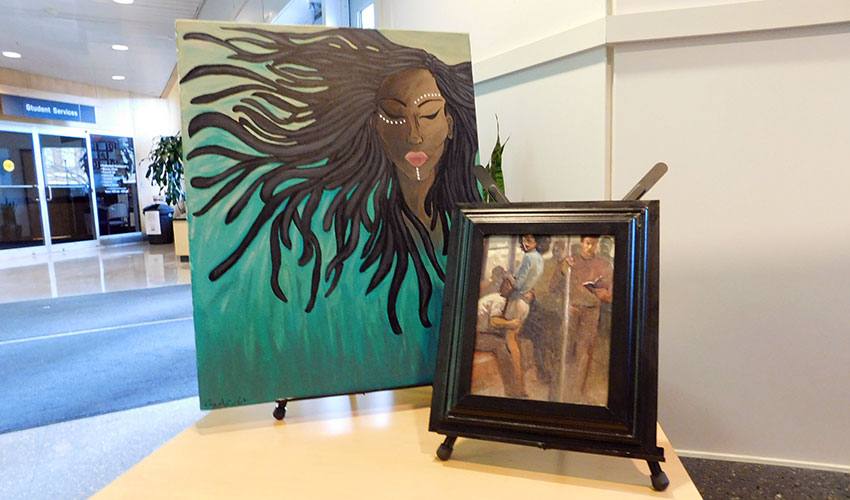 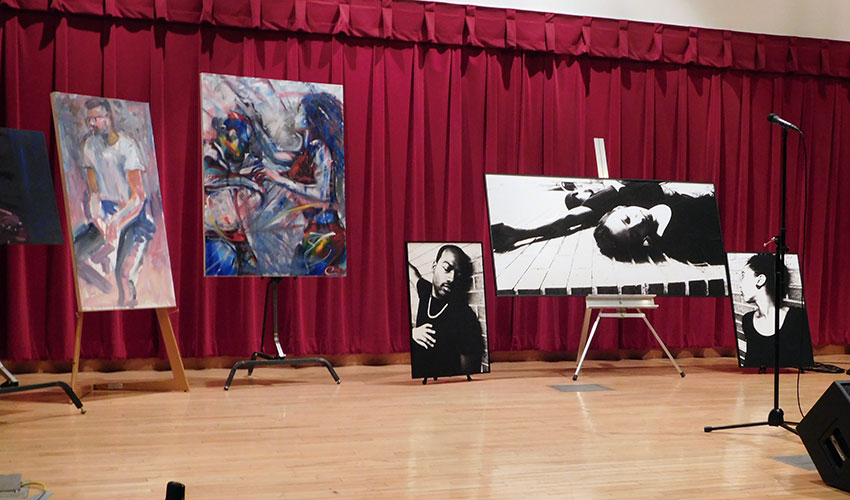 One of the greatest risk factors for special education placement, school failure, and later life marginalization is reading incompetence (Fuchs, Fuchs, Safer, & McInerny, 2005). The National Reading Panel (NRP, 2000) identified five basic components critical for reading instruction (i.e., phonemic awareness, alphabetic principal, vocabulary development, fluency, and comprehension) but noted that fluency is often an overlooked aspect of explicit classroom reading instruction. They also mention that oral reading fluency should be developed during beginning reading instruction and that repeated reading intervention is one evidence-based practice that can be used effectively for this purpose. Many young children who show special education risk, especially students of color in urban schools, struggle with reading fluency and would benefit from explicit fluency training. Some authorities posit beginning reading can be further enhanced by using culturally relevant (CR) materials along with repeated reading (e.g., Bishop, 2007; Gay, 2004) particularly for students of color who are struggling readers.

My dissertation examines the involvement of a school librarian in monitoring a computer software program (Reading RACES – Relevant and Culturally Engaging Stories) to five second-graders attending an urban school, who demonstrated reading risk. The Reading RACES program was designed to deliver a repeated reading interventions using culturally relevant literature. A multiple baseline probe across participants’ design was employed to determine the effects of Reading RACES on oral reading fluency (ORF) and comprehension of the participants. This study also used a descriptive analysis of the librarian’s ability to monitor the intervention.

This Fall, I will begin a tenure-track position at the University of West Georgia as an Assistant Professor in Special Education. My research interest includes academic and social interventions for learners considered at-risk for academic failure and/or diagnosed with high incidence disabilities. I also hope to explores the intersections between evidence-based intervention and sociocultural approaches to education. My dissertation focuses on transcultural literacy practices and global education based on an online, collaborative writing project between middle school students in Nairobi, Kenya and Aleknagik, Alaska. I investigate how students’ strategies of communication across cultural and geospatial difference signal the impact of implicit and explicit sociocultural practices on intercultural communication. In this study, I also seek to better understand how students’ communicative strategies, which draw from resources inside and outside schools, can make a case for connecting schools to communities, and offer pedagogical strategies for teaching diverse learners. Additionally, my dissertation visualizes and amplifies marginalized and silenced identities (selves) and voices. That is, Aleknagik students who are Yup’ik, like other Alaskan Natives, are oftentimes silenced and considered to be nonmainstream
in Alaska. Kenyan students in cosmopolitan, multiethnic, multicultural Nairobi and whose language is characterized by urban plurilingualism, speak in ways that are peripheralized in classrooms because of policies that regulate language use. Overall, this dissertation theorizes and makes visible the resourcefulness of these rarely examined student experiences, and explores how technology, multiculturalism, and multilingualism intersect with pedagogy and classroom communication.
The position, which is at The College of New Jersey, is a tenure-track Assistant Professor in the Department of Special Education, Language, and Literacy with responsibilities in teaching, scholarship in literacy, service, and advisement. The position also requires experience in and practice of inclusive education, school-to-community collaboration, and a focus on literacy and access.
I have always tapped into my prior teaching experience in my scholarship and plan to continue this journey of reflection on the role of education in a pluralistic, transcultural, and globalizing world. I look forward to opportunities where I can tap into various instructional approaches and formal and informal assessment in order to engage with resources from students’ culturally and linguistically diverse backgrounds. My scholarly path is grounded on my upbringing and experiences that began in linguistically and culturally diverse settings in Kenya, and continue to extend internationally. Having been raised in a country with over 40 indigenous languages, a national language (Swahili), and an official language (standard Kenyan English), I am cognizant of how contested repertoires of communication impact identity formation. I plan to continue my journey in understanding my, and other people’s transcultural literacy practices and strategies of intercultural communication as I reflect on the resourcefulness that diversity brings to learning.

To celebrate National Poetry Month, the EHE Office of Diversity and Inclusion invite the College, University, and local Community to enjoy live performances of music, poetry, and spoken word, and to experience an amazing art exhibit.

On Friday, April 22, 2016, from 6-8PM in Saxbe Auditorium (located in the Moritz College of Law, Drinko Hall), faculty, staff, students, and community groups can listen to performances and/or share their own creative expressions on the stage. Join us to reflect on the importance of creative expressions in our lives and in work.