Dr. Stephanie Power-Carter in the Department of Teaching and Learning has an opening for a 25% Graduate Research Associate (GRA) for the remainder of the Autumn 2021 semester and Spring 2022 semester. The GRA position will provide 10 hours of service per week to support her role as a department section head. This position will assist her with Section head duties and facilitating the mission and vision of the Department Teaching and Learning., GRA will assist with administrative tasks and the day-to-day facilitation of Section 1 under the supervision of Dr. Power-Carter. The GRA will be responsible for general administrative activities such as assisting in creating communication documents, preparing handouts, data gathering and entry, filing and organizing information, assisting with presentations, section meetings, and section retreats as well as other duties as assigned.

Interested applicants should send a resume/CV to Dr. Power-Carter (power-carter.2@osu.edu). Review of applications will occur on a rolling basis and will be accepted until a candidate is identified.

The College has a commitment to antiracism for students, staff, and faculty.  As a part of this commitment, we are delighted to announce that we are forming book discussion groups for students in EHE this fall.  The book we will read and discuss is Dr. Bettina Love’s We want to do more than survive: Abolitionist teaching and the pursuit of educational freedom.  The book is being provided free to the first 40 students who sign up for the discussion groups.  These group meetings will be held for four weeks on the same day and time, and we have a variety of times and days, both on zoom and in person, for you to choose from.  Sign ups will close on Sept 23.

Sign up to participate in the Talk About Race book discussion group. 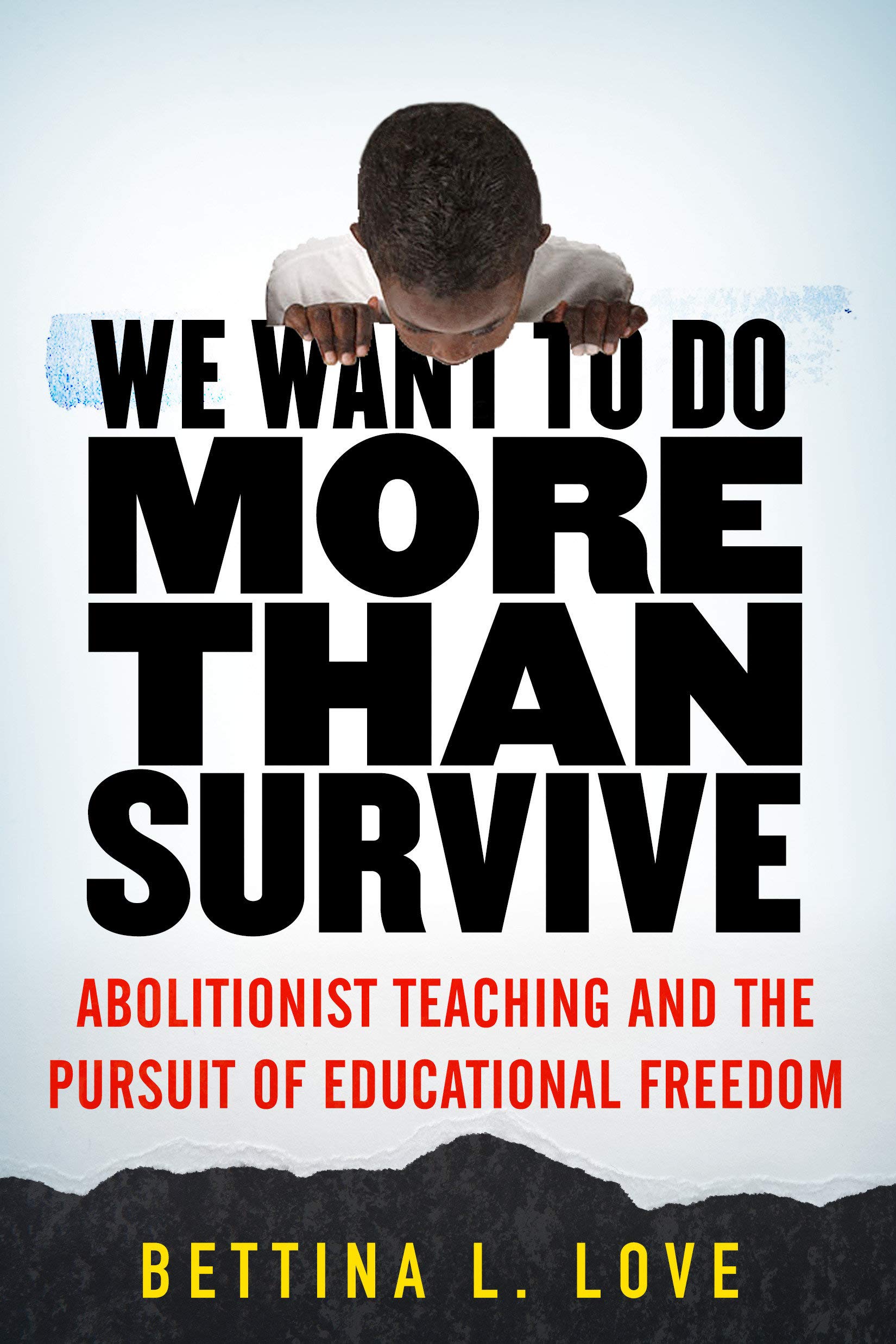 If you have questions, please contact Dr. Colette Dollarhide.

Lori Patton Davis, professor of higher education and student affairs and a nationally recognized scholar, educator and thought leader on racial justice, equity and inclusion in education, has been selected to deliver the iconic Annual Brown Lecture in Education Research during the 2021 conference of the American Educational Research Association (AERA).

Her lecture title, “Still Climbing the Hill: Intersectional Reflections on Brown and Beyond,” is inspired by the poem by Amanda Gorman, the National Youth Poet Laureate who read “The Hill We Climb” at the 2021 Presidential Inauguration.

Patton Davis, one of the most influential educators in the country and the first Black woman elected president of the Association for the Study of Higher Education, will challenge the dominant narrative about the 1954 Brown v. the Board of Education decision and introduce perspectives typically overlooked or erased in larger Brown discussions.

Her insights will inform the work of scholars, students and practitioners who want to challenge the traditional thought processes around Brown, its impact and how it is applied today, not just in K-12 schools, but in higher education as well.

Drawing on her professional philosophy that is rooted in equity-mindedness, collaboration and innovation, Patton Davis’ talk will bring context that benefits educators, policymakers and researchers in three ways:

Patton Davis also will make recommendations about how a critical race lens might guide us toward a more progressive realization of the promises of Brown. In particular, she will suggest how educational researchers, the majority of whom are situated in postsecondary settings, can engage in activism, modeled after the communities still fighting for racial and educational equity since Brown.

Patton Davis is a trailblazer in academia

As a two-time recipient of the Mildred E. Garcia Award for Exemplary Scholarship from the Association for the Study of Higher Education, as well as the first Black woman to chair the college’s Department of Educational Studies, Patton Davis maintains a critical research agenda that has deeply influenced the landscape of and knowledge base within higher education research.

Much of her scholarship centers around the lives and experiences of minoritized groups as they interact with visible and invisible policies, practices and processes.

Currently, Patton Davis, a native of East St. Louis, Illinois, is studying the experiences of Black children’s educational pathways under the Missouri Transfer Law. Funded in part by the Spencer Foundation, she explores how a seemingly innocuous education policy led to the near dismantling of a high school populated by racially, socially and economically disadvantaged students.

Black women and girls. Patton Davis’ scholarship and praxis is explicitly intersectional. Her research, with its focus on the experiences of Black women and girls in P-20+ educational and social contexts, particularly their collegiate trajectories, as well as their gendered-raced-sexual identities and experiences, is a galvanizing force and model for a generation of emerging and early career scholars committed to disrupting the scholarly neglect to which Black women and girls have been subjected.

Campus culture centers. Patton Davis is particularly recognized as the foremost researcher and scholar in the area of campus culture centers, having written the first dissertation that underscored the significant contributions of Black culture centers and their emergence during the Black Student Movement of the 1960s and 1970s.

In addition to peer-reviewed publications, she edited Campus Culture Centers in Higher Education: Perspectives on Identity, Theory, and Practice, the first and only volume to highlight various types of racial/ethnic culture centers in higher education, their continued relevance and implications for their existence in relation to student retention and success.

She also addresses CRT as co-author of the most widely adopted text in higher education and student affairs graduate programs across the country, Student Development in College, published by Wiley.

Patton Davis’ robust body of work has been published in multiple respected journals. She has served on nine editorial boards for journals in the field of education and is former associate editor of the International Journal of Qualitative Studies in Education.

She was twice appointed as AERA Division J Equity and inclusion Officer and was a 2021 AERA Conference Program Chair. The American College Personnel Association (ACPA) members elected her as the inaugural Director of Equity and Inclusion on the association’s national governing board.

She has received many national awards for her scholarly contributions, including ACPA recognizing her with its Senior Scholar, Diamond Honoree and Contribution to Knowledge awards.

The National Association of Student Personnel Administrators recognized her with the George D. Kuh Outstanding Contribution to Research Award and the Robert H. Shaffer Award for Excellence as a Graduate Faculty Member.

Patton Davis’ research has been funded by the Spencer Foundation, Lumina Foundation, American Psychological Foundation and an array of other entities.

Patton Davis was recently recognized in the 2021 Edu-Scholar Rankings as among the top 200 most influential educators in the United States.

She is a frequently sought expert on a wide range of education topics. Dozens of media outlets have quoted her and featured her research, including:

As some of you are aware, the Graduate School has been offering dissertation and thesis format reviews remotely during the pandemic.  This process has worked really well, so much so that the option for a remote format review will now be standard.  Students will need to submit a complete draft of their document to grad-schoolformatreview@osu.edu and Graduation Services staff will follow-up with the student concerning feedback about the formatting.  PhD students of course will need to have the draft document submitted at least two weeks before their final defense.  Master’s thesis students are not required to submit their draft thesis for a format review, but we highly encouraged them to do so to avoid problems when doing the final submission for graduation.   Around the thesis defense is a good time for master’s students to have the review.  In addition to the remote option, students can also still bring a complete paper draft of their dissertation/thesis document to the Graduate School in 247 University Hall for an in-person review.  In-person reviews can be done on a walk-in basis from 9:00 a.m. to 4:30 p.m. Monday thru Friday.

Another policy that is extending beyond the pandemic and is now considered standard is the platform option for final exams.  Exams can be conducted on-campus, remotely, or a hybrid.  Remote and hybrid exams should follow the guidelines for videoconferencing as outlined in Appendix B of the Graduate School Handbook.  The main point to remember is that all exam participants must be able to see and hear each other during the entire exam, so platforms such as Zoom or Microsoft Teams are a good way to go.  PhD students will designate the platform for their exams on the respective Application for Candidacy and Application for Final Exam on Gradforms.  Petitions are not required for videoconferencing. Congrats to our Ed Studies faculty who received awards at the EHE Convocation this week! Applications for all Educational Studies programs are now live online! Most of our programs have an application deadline of December 1. To check out our programs, application requirements and deadlines, and other helpful information, please check the links below. Questions? Contact us at edstudies@osu.edu. All PhD and EdD students

All MA, MLT and EdS students

Dates to keep in mind

As we prepare for the Autumn semester, we are excited to announce that our physical Student Services office in Ramseyer Hall is now open! Please see some notes about our office hours below:

When is the office open?
Our physical office hours are Monday-Friday, 9 a.m.-4 p.m. We are located in Ramseyer 122. We are also available through phone or email Monday-Friday, 8 a.m.-5 p.m.

Will all staff members be in the office during these hours?
Many of our staff will be working a hybrid schedule as we begin the semester. If you are looking to meet with a specific staff member in person, please email edstudies@osu.edu.

What COVID safety protocols will the office be following?
Our office will adhere to all university safety protocols. As was recently announced by President Johnson, masks are currently required indoors for everyone, regardless of vaccination status. We also ask that visitors respect physical distancing to protect everyone’s safety. Visit https://safeandhealthy.osu.edu/ to stay updated on the most current information regarding the university’s COVID safety protocols.

Will staff still be available to meet virtually?
Yes. If you are uncomfortable coming to the office in person or are not able to physically be here during our office hours, we are still happy to meet with you virtually! Reach out to edstudies@osu.edu to set up a virtual meeting appointment. You can also reach us by phone at 614-688-4007.

We hope you all have had a terrific summer and we are excited to welcome you back to campus in just a few short weeks!

The purpose of the series is to engage our alums and general audiences in thinking about and reflecting on what it means to conduct educational research from a standpoint that honors Black lives in the research process, while also disrupting racism and white supremacy. Given the unprecedented moment we are all experiencing in our lifetime we are committed to shifting the landscape of qualitative research and using this research to shift our sociopolitical context toward racial equity and justice. Each OSU Alum will engage in a discussion with hosts Dr. Lori Patton Davis, Professor and Department Chair of Educational Studies and Dr. Penny A. Pasque, Professor and Director of QualLab.