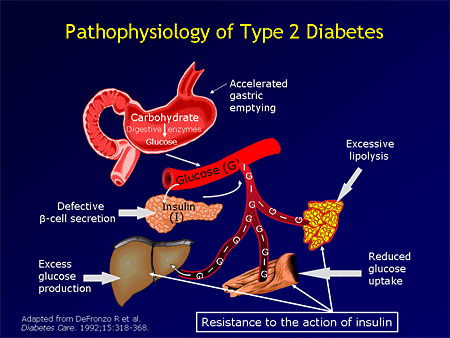 Type 2 diabetes mellitus is often associated with certain genetic predispositions, environmental factors, lifestyle choices, and the dynamic interactions between all of these different aspects.  This ailment is a disease state which involves the dysfunction of insulin-producing pancreatic beta cells, insulin hormone resistance in cells of the body, or a combination of both.  Diabetes mellitus type 2 is a condition that typically begins with a resistance to insulin by cells of the body, that worsens over time.  This resistance, and the compensating production of insulin by pancreatic beta cells, may eventually lead to beta cell failure.  When the beta cells fail, endogenous insulin can no longer be secreted (McCance and Huether, 2014).

Insulin resistance is the inability of cells to use the insulin hormone, which inhibits the cell’s capability to absorb and then use glucose in metabolic processes.  This is of primary concern in cells that are typically high in metabolic function, such as muscle, liver, and adipose tissues.  Since insulin is responsible for the cellular uptake of glucose, the sugar molecules will remain in the bloodstream (McCance and Huether, 2014).

The pancreatic beta cells, which are responsible for producing and releasing insulin, may also dysfunction in type 2 diabetes mellitus.  If the insulin supply diminishes entirely, the individual will be dependent upon exogenous insulin (McCance and Huether, 2014).

Whether insulin is not present due to hyposecretion, or if the hormone is rendered useless because of insulin resistance, the end result will be hyperglycemia.  Hyperglycemia, or elevated glucose levels within the blood, is the hallmark of type 2 diabetes mellitus.  Hyperglycemia, and the associated inflammatory processes, lead to the micro and macro-vascular changes that are seen as complications of diabetes mellitus (McCance and Huether, 2014).

According to McCance and Huether (2014) complications of diabetes include the following:

According to the American Diabetic Association (2014), the diagnosis of type 2 diabetes mellitus can be made after establishing one of the following:

1.) A glycosolated hemoglobin, or hemoglobin A1C, greater than or equal to 6.5%.

3.) A 2-hour plasma glucose greater than, or equal to, 200 mg/dL during an Oral Glucose Tolerance Test (OGTT).

4.) A random plasma glucose greater than, or equal to, 200 mg/dL in a patient who is exhibiting signs and symptoms of hyperglycemia.