As seen from the English 3364 class blog

The in-laws. The simple words makes a man or woman cringe in fear. Even back in the days where flirting was done though smashing your crush with a club, as exemplified in this comic from “The New Yorker” cartoonist George Booth’s “Will Your Mother be Coming Down for Dinner?”

This particular piece appeared in “The New Yorker” on June 21, 1982. Cave people have been a part of Booth’s character gallery since their debut in 1957 in “Ip Gissa Gul,” according to “The Illustrated Man: George Booth, The New Yorker’s Sage of Disorder” by Amy Finch for “The Boston Phoenix.” 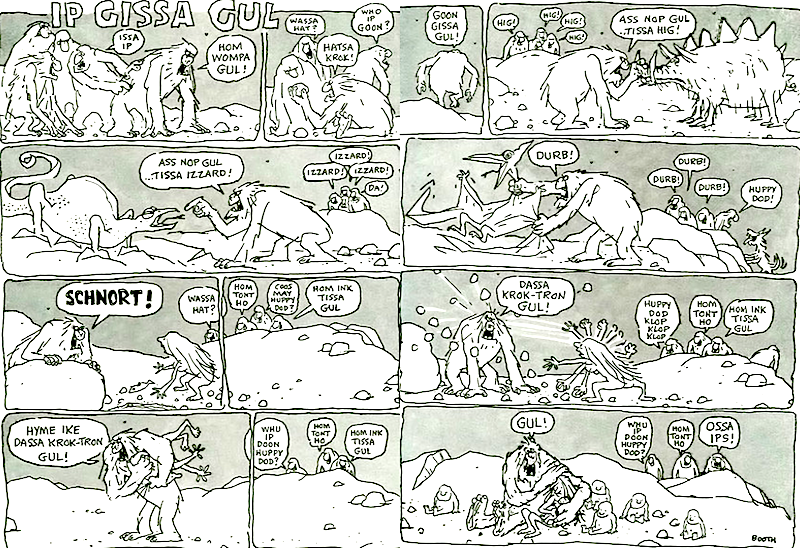 As the cavemen evolved in times of “ugg,” so did Booth’s characters in both design and dialect. The cave people have a better handle on the english language, I assuming for the readers to better understand the flow of the joke, and are sensible enough to not engage in beasts bigger than themselves (unless you count the fear of your mother-in-law one of those beasts.) Booth also adapts his characters to a new layout, not relying on speech bubbles and a set of panels to express the comic, but rather entertains the readers in one image with a line of text, relying on the readers to interpret the humor. I found this to be successful on Booth’s part because not only are you eliminating the need for space to drive the joke home, but takes a modern idea and adapts it humorously to his characters, something I’m sure readers of “The New Yorker” can relate to.

My first reaction to this piece was the success of the joke. Coming down for dinner. Phew boy.

But then I noticed something odd about the mother in the upper right hand corner. Luckily with the freedom the Billy Ireland Cartoon Library and Museum gives you, I was able to look closer at the original art, seeing that the mother was made up from a series of taped images.

As someone who has been drawing for a number of years, this was interesting because I never thought that the comics that appear in news print would be made up with a series of layered images. Granted, digital comics are now made up, but if something needs fixed in a digital picture, it’s possible you would need to fix a multiple of layers versus what Booth did here and just drew what he needed and taped what needed to be fixed, relying on the printer to acknowledge these fixings. Upon noticing this, I started to spot these fixes, as well as the use of this technique, in other comics around the museum, such as in Grace Drayton’s “Toodles” and Bil Keane’s “Family Circus.”

Goes to show you that if at first you don’t succeed, reach for the Scotch tape.

Hello fine people of the Internet. I am your host Kim Dailey and I am here to rant about comics.

Not only do I hope to explore the history behind comics and how they’ve developed to what they are today, but dwell in how they’ve been adapted to different forms of media and entertainment, as well as sharing my favorite aspects and insights of all things comics.