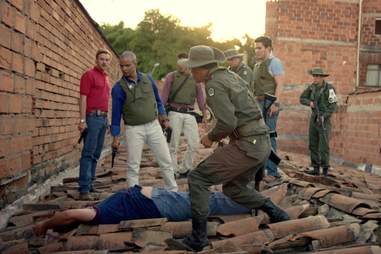 In this text review, I chose to analyze one of my favorite Netflix series: Narcos. Specifically, the season finale that concludes with Pablo Escobar’s death was an episode packed with varying themes and pertains to racial intersections we’ve seen in the course. For context, Pablo Escobar died on a rooftop in Medellin, Colombia, after a shootout with local law enforcement. After his drug empire went down, he was evading the police for a year after escaping the prison he was allowed to construct for himself. Police were ultimately able to track Pablo down via phone call tracking and monitoring, however for some time he had been able to exist under the radar in plain sight.
Part of what made Pablo so difficult to take down and ultimately arrest was that he had so much power, influence, and money. At one point during his life, he considered running for President of Colombia, and was awarded a congressional seat. Additionally, he had the alliance of the local people who he would pay off (in his eyes “pay forward”) for their support. To many, Pablo was just like them and emerged from nothing, embodying a true success story. People dedicated shrines to him and looked to him as royalty, even with knowledge of the death, destruction, and corruption he was single handedly responsible for.
Pablo arguably would have been taken down earlier in his lifetime if local authorities and intelligence agencies cooperated more transparently with the United States Drug Enforcement Agency (DEA). Throughout the show, we see conflicts between the DEA and local officials in terms of jurisdictional issues, information, and corruption. Ultimately this relates to many power struggles we witnessed during this course and the intersection of the DEA being from America made their jobs more difficult as they were not trusted by locals for some time. To me, it was shocking to consider how many lives could have been saved if biases were overcome earlier on, and the levels of corruption and power manipulation could have been mitigated.