For a while, the world seemed to be divided between the colonizer and colonized. The Battle of Algiers Directed by Gillo Pontecorvo and released in 1967 is a film dedicated to exploring the relationship between the colonized Algerians and colonizing force of France. The film chronicles the missions led by Algerian guerilla fighters against the French population living among them. Despite the Algerian and French populations living within the same city, Algiers, the difference between their conditions is stark. French population can move freely, clad in their Western clothing and driving their expensive cars while the Algerian population is faced with poverty and checkpoint after checkpoint, making them foreigners in their own city. The differences between the French and Algerian population is a major theme in the film and drives the story forward The guerilla fighters consist of women and men carrying out missions for the FLN (Algerian Liberation Front) in an effort to break the French and expel them from their city and country. One of the most profound aspects of this film is its ability to make the viewer constantly question their idea of justice and how far they’re willing to go. The guerilla fighters often harmed “innocent” people that were a part of the French population but it’s up to the viewer to decide if it was justified or not. Justice is often not black and white as we’ve seen in past literature and films and this film, in particular, continues to build our understanding of justice.

Identity is a major theme of this movie, but so is the fluidity of culture. The women in this movie are often seen oscillating between wearing their traditional Algerian clothing and French clothing to blend in. The women are treated very differently by the occupying force based on how they are dressed. This ability to move between “Eastern” and “Western” urges the viewer to question whether the cultures are separated by a hardline or a more fluid barrier. Bhabha’s analysis of culture and the clash of cultures adds on another layer of complexity and understanding. 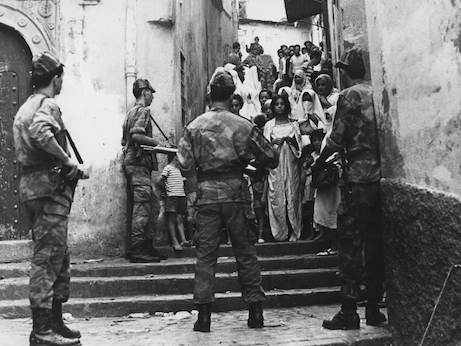 3 thoughts on “Text Review – Battle of Algiers (A. Djouadi)”