The BCDT opted to attend the Brewery District planning commission meeting on October 4th. It was in a fairly accessible government building located on 111 Front St. It is important to note, however, that the building required a government ID and check-in in order to attend the meeting — in some ways this could be seen as a barrier to entry.

Upon arrival, the room was not very well populated. While there were 96 seats available, less than 15 were filled, including those who intended to present to the commission and our team. The room was laid out in a very typical manner, with the commissioners at a large desk at the front, and a 2-microphone desk facing the commissioners for people to give presentations.

The procedure was surprisingly informal, involving a basic opening statement and the first item on the agenda almost immediately being brought up afterward.

The first item was fairly straight forward. A Holiday Inn Express was replacing another hotel and there was a short debate on signage. One would be a freestanding sign that replaced an older sign of the same style, and the other a mounted sign. The freestanding sign technically went against the zoning ordinances of the Brewery District, but the commissioners seemed happy to help with the hotel representative to make sure it could be grandfathered in because it was replacing a sign. The other sign was rejected until further manufacturing information could be obtained, as all the presenter had brought with him was a visual draft with no formal technical specifications. Overall, this process only took around 20 minutes and was settled quickly.

The second case was the truly interesting one. Three men, working for a developer, sat across the from commissioners. They were pitching modifications to a two unit residential area in the center of the Brewery District. The first order of business was by far the most contentious yet: parking.

Each unit was listed to have two spaces. Using hand and digital drafts on a board, the three developers presented how it was to be laid out. Immediately one of the commissioners began to object, claiming it would not be possible for larger vehicles such as pickup trucks to fit in the space. This was the first argument that started among the commissioners.

Several of them took the side of the developers and several took the side of their fellow commissioner. The problem seemed less to do with strict regulation, but instead with personal preference in design. Several argued that this was just a reality of owning a home in the area and that if you wanted a large vehicle, you would not live in that unit. On the other hand, the main objector argued that you cannot expect tennants to change transportation choices based on where they live — which seems somewhat antithetical to good planning.

The solution that the board agreed upon was to petition the city for an eight foot curb cut and expand the space. The developers did not like this, as it would further delay the construction, and a curb cut could be difficult to attain if the curb was made from historic sandstone. Thus, more debate ensued.

After nearly 30 minutes of entirely informal bickering, two options were settled upon. First, the curb cut, and second, listing the unit as zero parking, even if two spots are technically available. The developers seemed unhappy with this decision, but accepted it as it was their only choice. After a vote, the commissioners agreed both were acceptable for the brewery district.

Even through arguing and disagreements, the room felt generally cooperative. The board had the best interests of the developer and the district in mind — they simply disagreed on fundamental design principles. This wide range of opinions most likely helps to build a resilient community rather than a single-minded one. For instance, the main objector, mentioned earlier, was a landscape architect with good experience in the field and had worked heavily on parking projects in the past. Even though he was only one with a dissenting opinion, the other members and the developers took his opinion very seriously.

Overall the meeting was a good experience, while it did take over 45 minutes to come to a conclusion on 2 parking spaces, it showed how planners, developers, and citizens all are accounted for in commission meetings. It also was an excellent look into some of the disorganization and informality that can occur even within the formal confines of a government building. 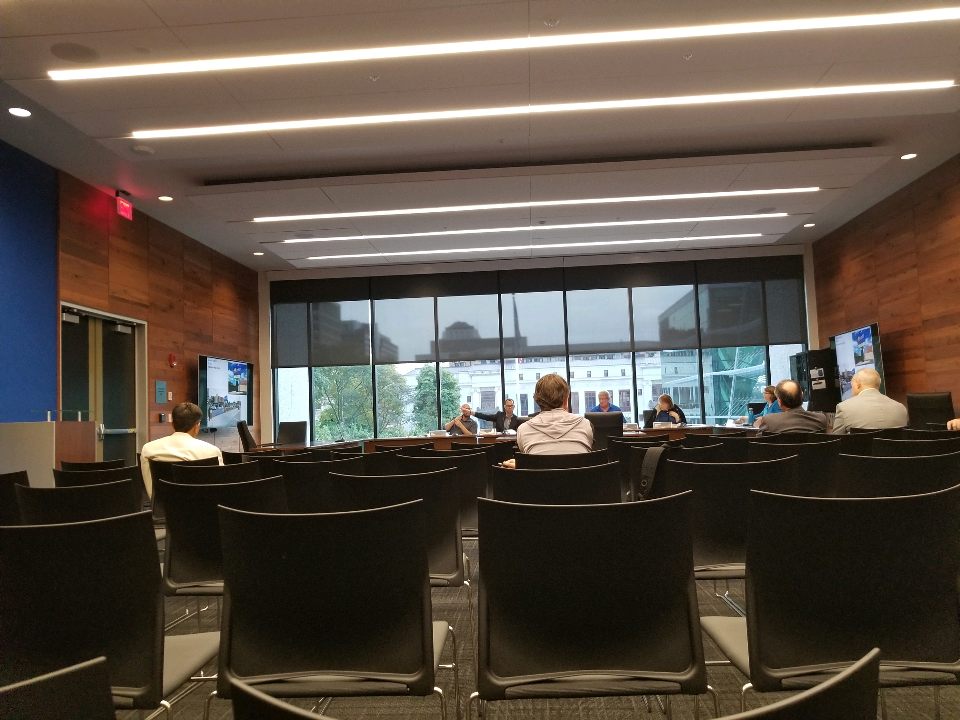