Pictured above is a rather unpleasant, aesthetically speaking, strip of High Street. It includes the sidewalk in front of the Ohio Stater, and the area in front of White Castle. This area is characterized by flat, cement, nothingness. In the mid afternoon, when we visited, it was also very sunny and somewhat unwelcoming. The result is that we felt far more comfortable and welcomed walking on the Campus side of the street. However, what is the purpose of a sidewalk if it does not feel welcoming to pedestrians. Having people prefer the campus side of the street leads to more congestion, and less business for stores along the edge.

We devised a plan to tackle the unfriendliness of the place using art.

The basic outline of the plan is broken into two parts, left and right. On the left is what we called the “green stretch” which would act as a water retention plot, a location for more aesthetically pleasing lighting, and as a way of removing the very ugly intersection of road and sidewalk. In the first two pictures posted, it can be seen that there is very little greenery. The goal of this project would be to improve greenery without losing the feeling of the area. Every two trees along this strip would then include a lamp post much like the one pictured in front of the UDF sign. Artist would then be employed to create OSU themed bike racks next to each light (in our initial rough draft they simply spell OSU, however a more creative approach could be taken by local artists). This creates a better sense of place, and encourages bicycle use. The overall goal is to create a well shaded, green, and friendly place during the day that doubles as a safely lit area at night.

Funding such a project can be difficult. Especially because the green space requires maintenance. That is where the image on the right comes into play. The goal is to add a large billboard onto the top of the White Castle. It’s location is designed to further provide adequate shade for the sidewalk. The billboard could then, theoretically, be rented out to potential advertisers — provide offering discounted design assistance through OSU’s design school, thus further integrating the arts. The profits generated from the billboard could then be used to pay a landscaper to maintain the grass/flower/tree beds proposed on the left.

Another part of this area that is subject to change is this: 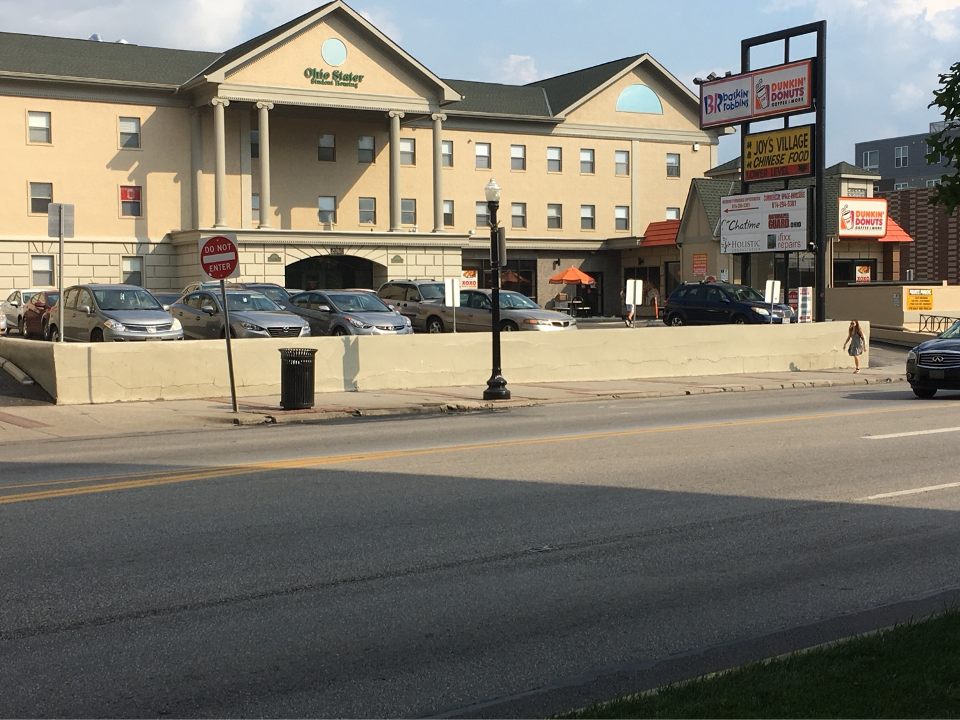 a short wall, about 5 feet, separates a parking lot from the sidewalk. It is a rather bleak beige color that stretches the entire block, and as can be seen, does not add much personality to the street. If the above idea is not adopted, something surely must be done to create a more inviting environment. We have proposed a mural + smaller green space. below is a rough draft of what the space could look like. 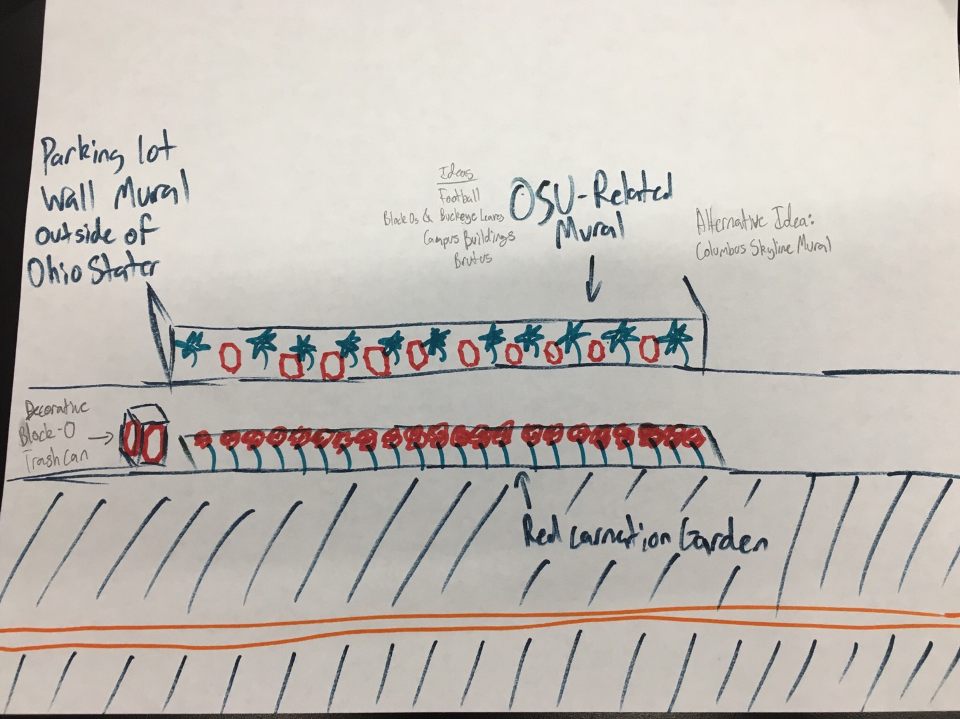 The art installation is heavily Ohio themed, featuring alternating buckeye leaves and Block Os, a red carnation garden (the state flower), and a Block O garbage can. There are, of course, other ideas implementable at this site as well. As mentioned in the photo, a Columbus Skyline Mural would be a good choice for the wall. Including the skyline would not only provide personality to the area, but also reinforce the idea that Ohio State is part of Columbus, as opposed to a separate entity within the borders. This artistic choice would improve sense of place, atmosphere of the sidewalk, and utilitarian use (trash cans help to cut down on litter, and attractive facades help to attract business to the Ohio Stater and the neighboring businesses).

Funding for this mural could, once again, be implemented by corporate sponsorship. Adding benches along the garden allows advertising opportunities, and integrating the financial interests of the Ohio Stater can be a good way to incentive involvement from the firm. While maintenance would still be important, the mural could be used as an alternating display for Ohio State design and art students as well.