Today we are focusing on the color orange, it’s origins, and how it made it’s way into the world of fashion. Orange is not always the most common color on the street, as it is vibrant, bright, and brings attention to those wearing it. Common in the fall season, the changing leaves, pumpkins, and modern advertising has ingrained this color into our heads as a cornerstone for the months of October and November. This is how we think of orange in the United States, but in different areas of the world, along with varying religions, orange takes on many meanings.

Use of the unofficially named color began in ancient times when Egyptians would use a yellow-orange mineral called realgar to paint on tomb walls. Highly toxic due to arsenic levels, realgar was also used by the Chinese to repel snakes. Perhaps this is one reasons we view the color orange with such an immediate reaction. It’s backgrounds stem from one of toxic natural minerals and danger, which is suitable for Halloween. Orpiment, another yellow-orange toxic mineral, was used in Ancient Rome as a way of valuable trade. In addition, it was used in Medieval times as a way to allow certain manuscript to be illuminated. Before it was even given a name, the color orange was given an image of value, danger, and vibrancy.

Known as yellow-red and saffron up until the 16th century, the importation of orange fruit trees Asia to Europe pathed the way for this new name. Common in Asian culture and religions, monks and holy men are often seen in this hue, while the color itself is known as a symbol of transformation in Confucianism. Saffron, from which the name stems, is considered the most expensive dye in both China and India. Once again, we are seeing this color given an image of high value, with significant meaning. It is also prevalent in the Buddhist religion. A representation of high illumination and perfection, the color can be used to signify a quest for knowledge, as well as a sign of fertility and abundance when worn by Pomona, the goddess of fruitful abundance.

Chrome orange was the start of synthetic orange pigments. One famous artist, Monet, often used this vibrant hue in nature to capture a sense of excitement and warmth. Today, we see variations in the color. A darker, warmer shade gives a sense of comfort and ease when associated with the fall season. A brighter, more vibrant shade would elicit strong emotions with eye catching capabilities. Popular examples in clothing would be safety vests, life jackets, U.S. prison jumpsuits, and other uniforms. We also see this trend in sports equipment, such as basketballs, ping pong balls, and certain brands of tennis balls. These examples call a need for attention and alertness. The 1960s was known for its mod culture. Orange was a prevalent color in these times. From furniture and clothing, to automobiles and album covers, this hue reached out its hand. Among every shade, a tangerine orange was most prevalent in the earlier years of the decade, eventually turning into a darker orange for the bohemian style 70s.

Above right is a Courreges orange vinyl coat from c.1965. Andre Courreges was a French dress designer. He was Balenciaga’s first assistant and eventually made his reputation through Parisian Fashion in the 1960s. He was mainly known for his futuristic and youth-oriented style. The jumpsuit with large orange polka dots was designed by Rudi Gernreich, a noted knitwear designer famed for unisex designs. Next is a silk print mini dress by Emilio Pucci, an Italian designer noted for his abstract prints in the late 1960s.

The History of the Color Orange: From Tomb Paintings to Modern-Day Jumpsuits 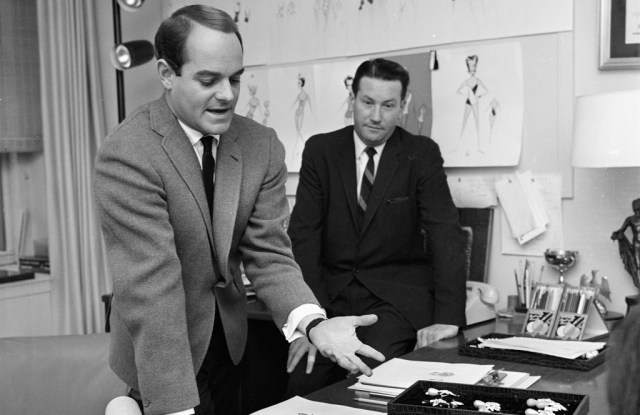 National Hispanic Heritage month is September 15th through October 15th, but any time is a great time to recognize and commemorate the achievements of Hispanic individuals and creatives. To celebrate the month, we will highlight a great Cuban-American 20th century designer, Luis Estevez. Luis Estevez was born around 1930 in Havana, Cuba. Originally with an interest in architecture, he began at the University of Havana but later attended the Traphagen School of Fashion in New York City for fashion design. He began his career as a window dresser for a summer job in New York for Lord & Taylor, sparking his interest in fashion and causing his shift from architecture to fashion design. After his studies at the Traphagen School of Fashion, he secured a job in Paris to work for Jean Patou, where he stayed for about 2 years before returning to New York to open his Grenelle-Estevez label with a few colleagues. Designing under his own name in 1955, Estevez was immediately successful. He received the Coty American Fashion Critics Award in 1956, owing his success to his individualistic, uncluttered, feminine, and tasteful clothing that appealed to modern, wealthy women. Estevez was mostly known for his cocktail and evening dresses with interesting necklines, but also became known for his theatrical and theme centered clothing in the 1960s such as his Night and Day collection and his Fly Me to the Moon collection in 1965. With continued success throughout the 1950s and 1960s, he moved to Los Angeles, California in 1967  and became established on the West Coast as well. Here he became well known for his flowing, body-conscious designs that often featured his signature cutouts, going more in the direction of sportswear and West Coast inspired dresses. His use of simple fabrics such as cotton, jersey, and silk contributed to a simple yet tasteful California feel. Luis Estevez had an impressive friends list in terms of the fashion community at the time, with Diane von Furstenburg, Bill Blass, and Hubert de Givenchy who was his best man at his wedding. Additionally, his clientele list in California became impressive as well, with Nancy Reagan, Lana Turner, and Eva Gabor who he later designed eveningwear for and eventually launched Luis Estevez International in 1974 with her parent firm.

Estevez had many other accomplishments throughout his career. From 1974 to 1977 he dressed First Lady Betty Ford during her husband Gerald Ford’s presidency. Awards he received include the Chicago Gold Coast award, Bambergers Golden Scissor award in 1962, the Tommy award in 1988, and the Lifetime Achievement Award at the Hispanic Designers Fashion Gala in 1990. His collections were showcased during theater productions of Hello Dolly and Hair, and his gowns have been shown at the Smithsonian Institute and Metropolitan Museum of Art. In the late 20th century Estevez continued designing on a smaller scale with boutiques on Melrose Avenue and later in Montecito. He eventually moved to Miami, Florida and retired in 1997. Luis Estevez died on November 28th, 2014 in Miami. With a long and impressive career, Luis Estevez deserves immense recognition for his accomplishments and impact on fashion in the mid-to-late 1900s and today. Designers today are influenced by Estevez’s work and he paved the way for many Hispanic people and Hispanic-American designers to receive their rightful high status in the fashion world. The fashion world was and is more diverse and accepting because of designers like Luis Estevez.