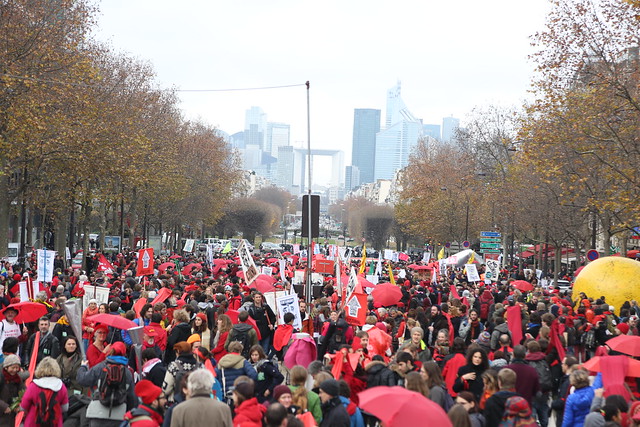 Today started with a Sierra Club meeting at 10 a.m., with special guest Elizabeth May, leader of the Green Party in Canada, and sent by the new Canadian Prime Minister Justin Trudeau as part of the Canadian delegation to the COP 21 climate talks. May was president of the Sierra Club Canada for 17 years before going into politics to oppose the previous Harper administration.

Elizabeth May briefs the Sierra Club

Most of May’s briefing to the Sierra Club delegation was confidential, and in any case was so high level and inside Canadian politics that I did not follow some of it. But there are a few things I can pass along that are public knowledge. First, she talked a lot about the difference between 1.5 degrees C in warming and 2 degrees C. It is a big difference. Basically it means the difference between whether some entire nations, especially low-lying island nations and coastal regions, continue to exist. The chant at the conference “1.5 to stay alive” is not just rhetoric. It’s a very real issue for millions if not billions of people across the world (not to mention so many other species).

Another thing May said is that the Green Party of Canada supports a carbon fee and dividend proposal much like the Citizens Climate Lobby proposal – in fact, I think CCL may have based its proposal on the Canadian Green Party. This is the party’s official position. May is not a fan of cap and trade – she said it has a lot of overhead costs and is subject to manipulation, loopholes, and corruption. However, if I understood her correctly, she would prefer to see some form of carbon pricing over none, including cap and trade, which is important because Ontario and Quebec just joined with the California cap and trade market. California says it has learned lessons from the problems with cap and trade in the EU, and that its market will work better. The proof there is in the pudding, and we will see how this turns out. After the Sierra Club briefing, I had to choose between two actions. One was at the Eiffel Tower, the other an indigenous people’s flotilla. I wasn’t clear on the Eiffel Tower action (though it turned out to be beautiful), so I went with the flotilla. It did not disappoint. A line of indigenous people spanned the bridge above the Bassin de la Villette canal where the flotilla was to take place, singing and beating drums. Then the canoes and kayaks came in, including the Sarayaku people’s “Canoe of Life” which had traveled 6000 miles to Paris from the Amazon.

Afterward was a press conference. I got in with my Citizens Voice badge and heard several speakers including: They spoke about how indigenous people know better than anyone how to manage resources such as forests sustainably and with respect for nature, about the need to keep oil and gas companies from destroying resources to get to fossil fuels which must remain in the ground, and about a proposal they were presenting to the COP21 conference. See more coverage here.

After the flotilla I went to the Westin Vendome downtown to pick up my badge for the Earth to Paris conference taking place Monday. The organizers highly recommended that we get our badges in advance as that way we could skip the line for admission and go straight to security. I was glad I did as the security line was long enough. That put me downtown, which I had not as yet been to, so I took the opportunity to play tourist. First I walked the entire length of the Jardin des Tuileries, which is like the Central Park of Paris full of different kinds of trees. Lots of kids and families were about, and a guy even asked me for directions in French, so I must have looked like I knew what I was doing. At the far end of the Tuileries is the Louvre. I didn’t go in, but I did take some pics on the famous Louvre plaza which includes the modern pyramid. I’d like to find out how that pyramid got built there – it looks very out of place in the 16th century setting. But everyone including me wanted to get photos. After that I got dinner at the best restaurant I’ve been to in Paris called Les Bis Repetita, which I found with the help of Yelp. One thing I like about French restaurants is that tax and tip are included in the price — so no guessing as to what to tip. Then I walked back toward Champs Elysees and saw the Ferris wheel lit up at night, which is a lot bigger up close than it looks from far away.

Along the boulevard itself up and down both sides was a huge Christmas fair. It was a couple of steps above your local or state fair in cheesiness, but fun nevertheless. There were carnival rides and games, lots of food stands, and stands selling Christmas decorations, jewelry, and the like. It also included several themed areas, such as one farm and zoo area filled entirely with animatronic animals. I wasn’t sure what to think, but it attracted tons of kids, and I was glad the animals were not real. I got the chance to use Fuze with my husband — I showed him the displays over video, while he showed me video of him playing with our very real cats. Finally Sunday night I was on the editorial board for ECO, the daily publication posted by Climate Action Network. Throughout the day, members of Climate Action Network submit articles for inclusion the next day. Those articles go for editing suggestions to the entire mailing list first. Then the editorial board gets them. The drill was to arrive at the CAN hub at 9:30 p.m. and edit stories until they are done. There are up to five people on the board, and it usually takes until about midnight to get through the stories. Most everyone sees every story, so the result is suggestion after suggestion on the text. Then the lead editor, Kyle Gracey this week, combines and reconciles all edits.

One trick is that the stories must be suitable for an international audience, so you can’t use any idioms or special words or phrases that non-English speakers would not understand. The text must also follow all CAN official positions on the issues. I ended up totally rewriting one story because the text was so awkward. Others were very good. It was a fun experience that reminded me of my newspaper copy editing days.

Here are some more pics from the day: So many badges, but I wish I had one more – to the Blue Zone. Xingu Chief Raoni of Brazil at the indigenous flotilla. Read about him at https://en.wikipedia.org/wiki/Raoni_Metuktire Paris ferris wheel from the Tuileries PDA is practically a requirement in Paris