Romance studies major wants to bring humanity back to medicine 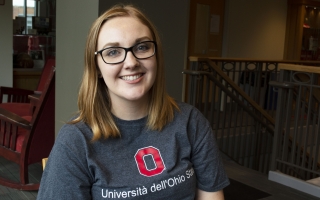 Mackenzie Wright says the beginning of her story seems, at first glance, stereotypical: Once when she was a kid, a doctor told her she should go into medicine. After that it was all plastic stethoscopes, tiny white coats and the board game “Operation.”

But once she got to her junior year of high school, she started to seriously think about what she wanted to study in college. Although she was still interested in pursuing medicine, she realized she craved learning about other fields, too.

“Every college visit I went on, people kept telling me, ‘You can be pre-med and major in whatever you want,’” Wright said. “So I did.”

She knew she wanted to travel — and literature and languages had always come to her more easily than the sciences — so Wright went into Romance studies, learning Italian, Spanish and Portuguese. She picked up a medical humanities minor and still continued taking pre-med courses. Now a fifth year graduating in the spring, she’s been accepted to medical school and says she ultimately wants to join the military as a physician so she can use her languages and work with diverse populations.

“If I hadn’t chosen to study Romance languages, I never would have really figured out my path and why I want to be a doctor, and I might not have stuck with it through all of the hard pre-med classes and all of that,” Wright said.

Wright grew up in Chillicothe, a city in the Appalachian region of Ohio. When she got to Ohio State, she found herself facing students who didn’t understand her background and the accompanying challenges she experienced as someone from an Appalachian community, such as her school having fewer resources that translated into her having to catch up to fellow students from more affluent districts once she got to college.

“At first, I felt like my home that I loved so much had let me down and left me unprepared, but eventually I came to realize that where I’m from isn’t something to be ashamed of or just a barrier to overcome,” Wright said. “Despite the challenges and the stigma associated with coming from Appalachia, or rural places in general, it’s the places and the people that made me who I am. I still have a ton of pride for my hometown, and I prefer to see my background as a strength.”

If I hadn’t chosen to study Romance languages, I never would have really figured out my path and why I want to be a doctor, and I might not have stuck with it.”

She realized early on that she had her work cut out for her to get into medical school, but she didn’t let that didn’t deter her. Instead, she has excelled inside and out of the classroom, helping launch the Community of Appalachian Student Leaders, becoming the president of the student group Buckeyes for Ronald McDonald House Charities and volunteering at the Wexner Medical Center.

“Everything about Mackenzie stands out,” said Julia Hawkins, associate professor in the Department of Classics who taught Wright in the course “Medicine in the Ancient World.” “I have never had a student like Mackenzie. Mackenzie is timeless. She is so hungry for knowledge.”

A pivotal moment in Wright’s journey was a three-week education abroad trip  to the Yucatán peninsula in Mexico. There, she studied the globalization of Maya country and researched traditional medicine and barriers to healthcare access for indigenous people. It was then that she began to recognize similarities between issues facing the Appalachian region and what she was researching in Mexico, like language and communication barriers and long travel times. Wright said she herself had to travel hours to receive medical care while growing up.

“I know they seem like very different things, studying abroad and speaking languages and being from a rural area, but they’ve taught me a lot of the same lessons,” Wright said.

Wright took the inspiration from Mexico back with her to Ohio and integrated it into her coursework, writing a paper in Italian about futurism, an art and sociopolitical movement in the early 20th century, and how it related to eugenics and fascism in Italy, where she also studied abraod. She’s working on a paper for a persuasive communication class about health disparities in Appalachian Ohio, and in her course with Hawkins, she wrote about how the Ancient Greek Hippocratic Corpus text Airs, Waters and Placesconnected to modern medicine and her own personal experiences.

“She instantly got that there was so much to be gained from understanding the history of medicine and medical ethics and the history between race and medicine and gender in medicine,” Hawkins said. “It was the best paper I’ve read in 10 years of teaching that class.”

Having a foundation in the humanities translates to Wright’s desire to become an empathetic, understanding doctor who strives to recognize and understand the challenges patients may face in accessing their health care, whether those are language and communication barriers, transportation issues or lack of internet access.

To reach that goal, Wright made sure to apply to medical programs that celebrate diversity in all forms, from diversity in thought and background to racial and ethnic identity, which she’s deeply valued as an undergraduate at Ohio State.

“There’s nowhere else I could’ve studied what I did and still felt prepared enough to apply to medical school and get in,” Wright said. “My favorite thing about Ohio State is really the diversity of opportunities here, and that people are so passionate about what they do, whatever that may be.”

Humanities Life Sciences Diversity, Equity and Inclusion
This story was featured in College of Arts and Sciences News on December 3, 2019. Original article at
https://artsandsciences.osu.edu/news/Mackenzie-Wright-brings-humanity-to-medicine