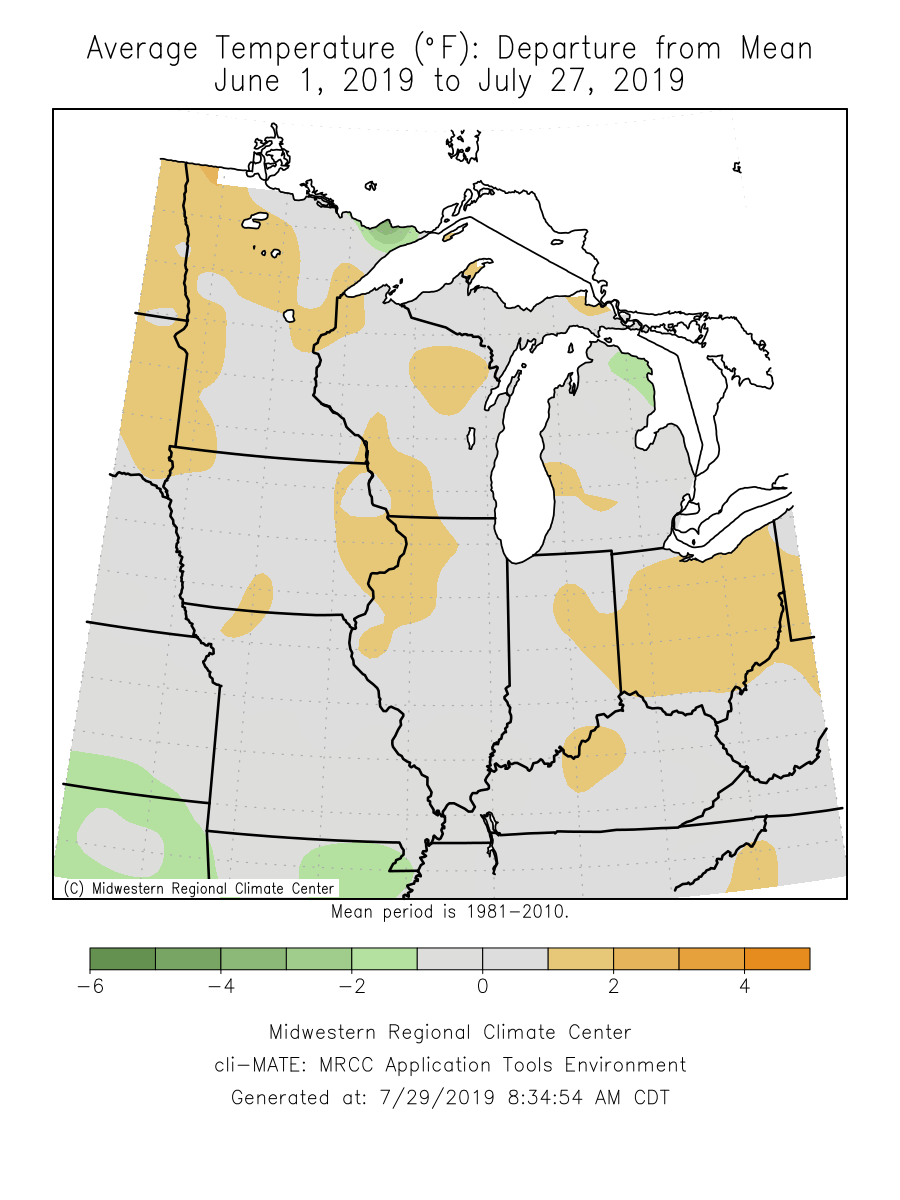 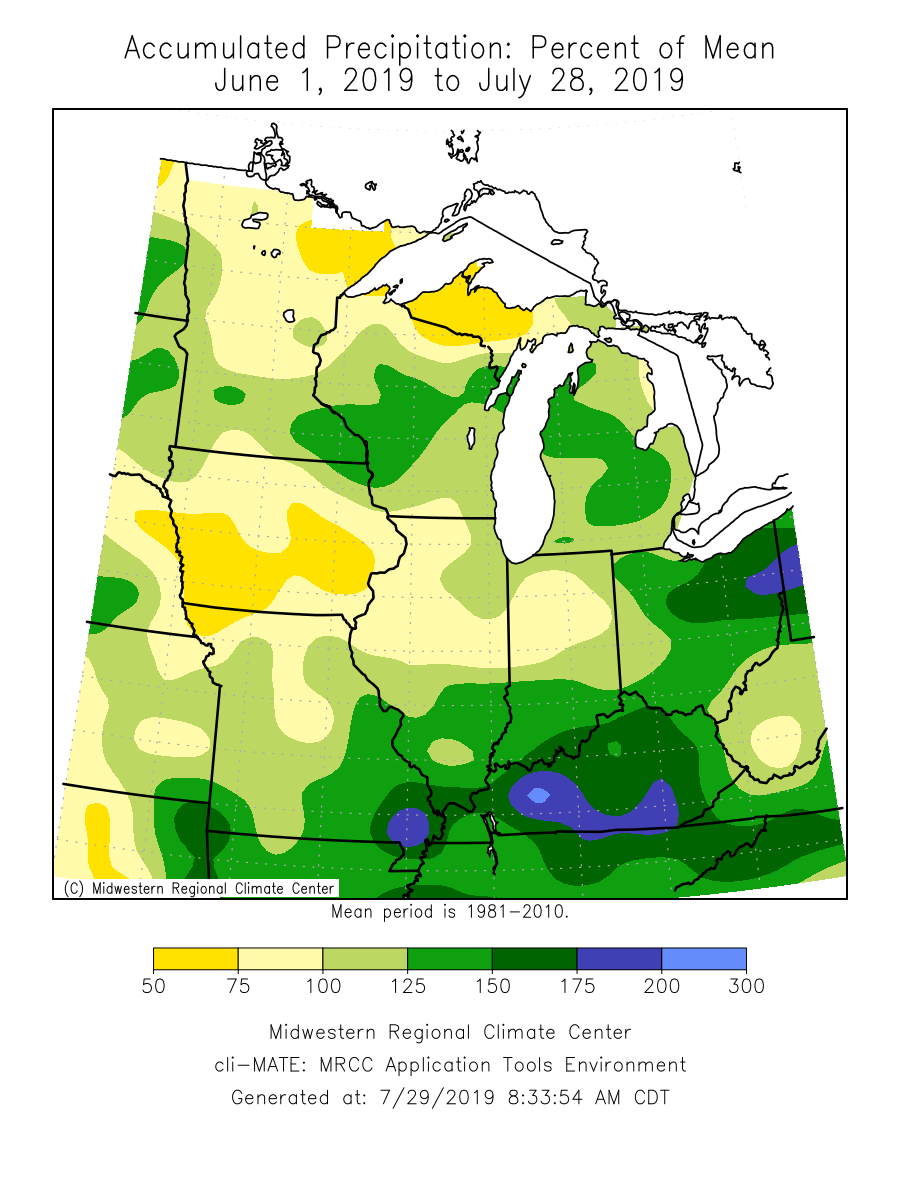 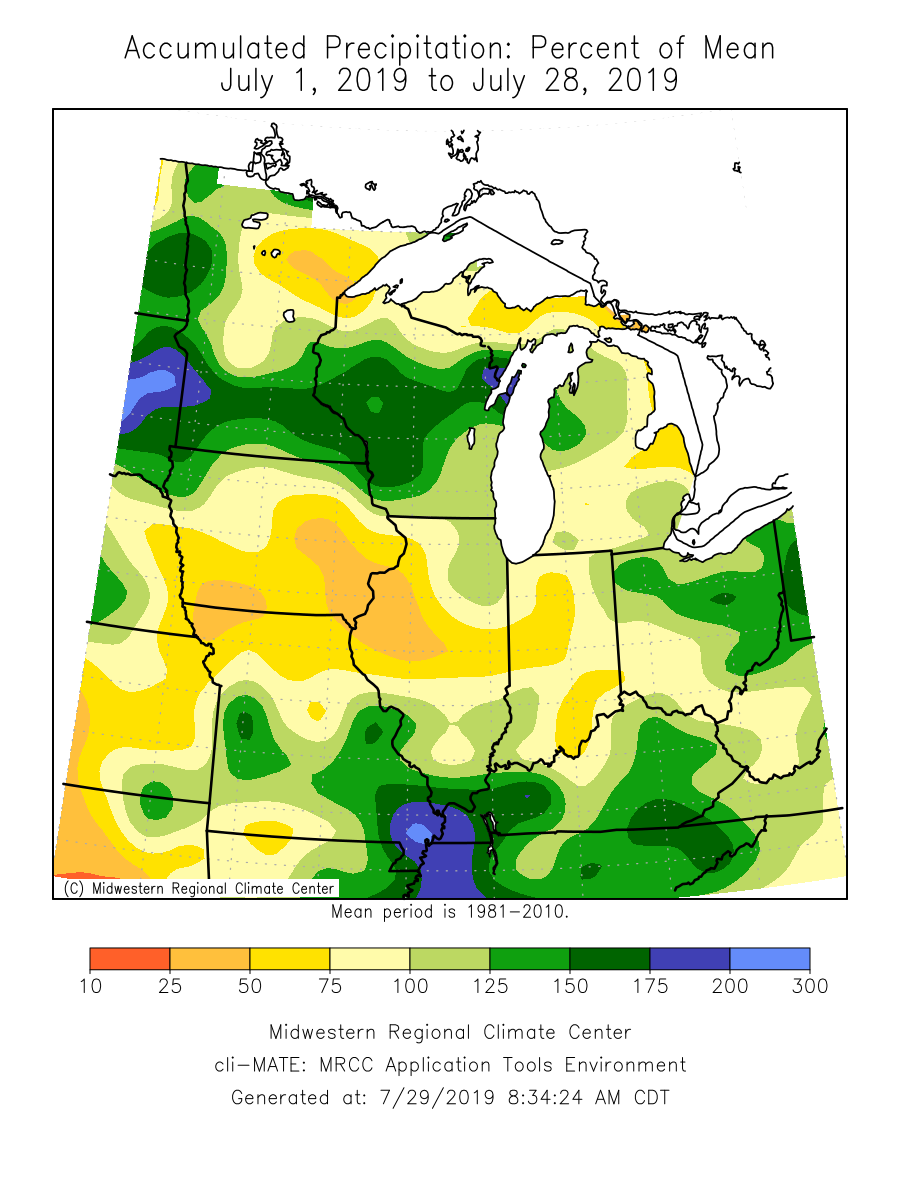 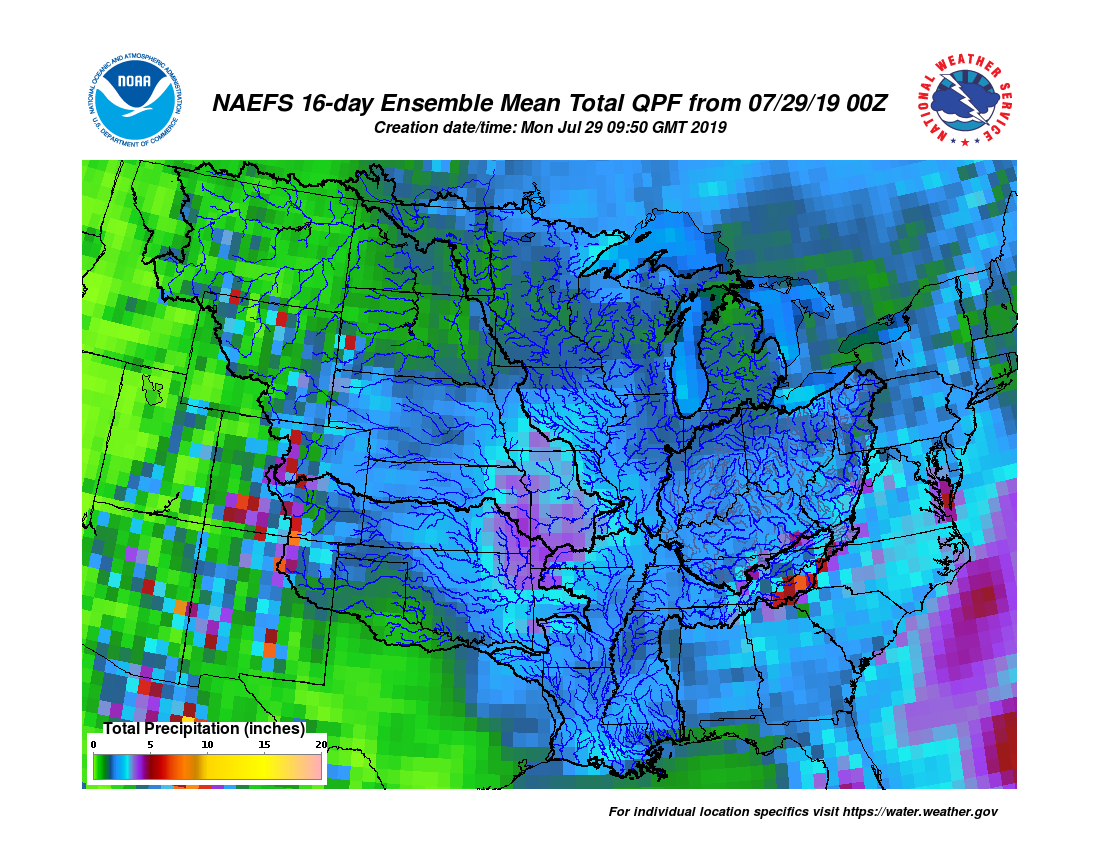 The outlook for August is near normal temperatures and precipitation.

The unrelenting rains this spring and summer have created many challenges that the farming community is now sorting through. In order to help with decisions, OSU Extension has created a Frequently Asked Questions webpage. This page provides the most up-to-date answers to questions about topics ranging from MFP and disaster payments to cover crops, forages, livestock concerns, management of crops that are out of sync with normal planting dates, as well as answers to more questions as information becomes available. There is also an option to submit questions that you would like answered. Webinars with more detailed information will also be shared here. The page is available at go.osu.edu/AgCrisis. Since the situation we are facing is constantly evolving, be sure to check back for the latest information available to help you. 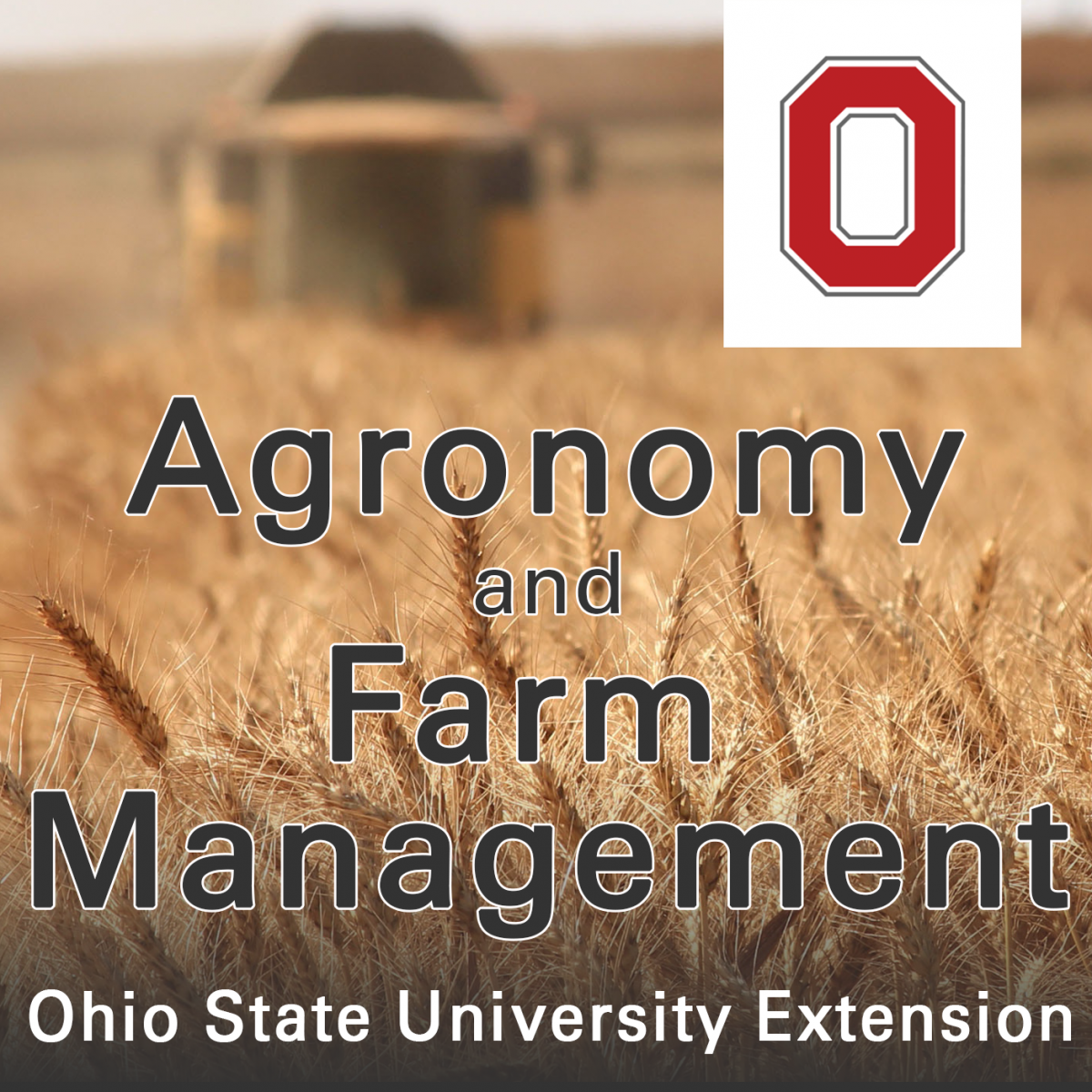 The Agronomy and Farm Management Podcast has been releasing new episodes every other week since May 2018 and is set to release its 30th episode next Wednesday. To make it easier for listeners to find past episodes, the podcast has a new landing page at http://go.osu.edu/AFM.

Here you will find a listing of all past episodes, descriptions of what we talked about and links to additional resources. We cover a wide range of topics for corn, soybean and small grain farmers on agronomic and farm management topics. Episodes include legal topics such as leases, LEBOR, and hemp; timely seasonal topics like disease, insects and weather; and operational improving strategies related to nutrient management, precision agriculture and grain marketing.

Stay up to date on the latest episodes by following us on Twitter and Facebook(@AFMPodcast) and adding us to your favorites in Apple Podcasts or Stitcher. Give us a good rating and review if you like the podcast! If there is a listening platform you would like us to broadcast on or you have a topic suggestion, reach out on social media or by email at Douridas.9@osu.edu. 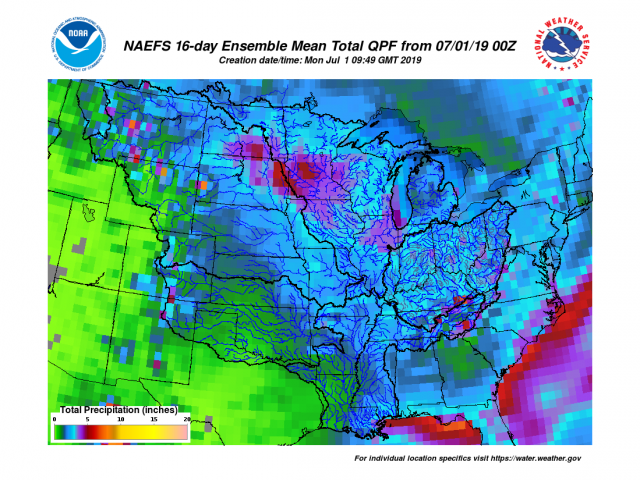 Even though it has gotten a little drier recently, the pattern around a big high pressure to the west and south of Ohio favors a warm and humid July with rain chances. However, there will be swings in the the pattern from week to week. The first week of July will offer a very warm and humid pattern with increasing rain chances. Week 2 will offer a cooler pattern but with continued rain chances. Week 3 and 4 will return to above normal temperatures and rainfall near normal. For the next two weeks, expect the average rainfall to be 2-4 inches across the state which is at or above normal.

Saturated soils after soybean planting can cause uneven emergence and stand reductions of varying extent depending on the stage of the soybean plant and other environmental factors including temperature and duration of saturated conditions. Additionally, increased disease incidence may further reduce plant stand. Saturated Soil Prior to Germination: While soil moisture is necessary for germination, soybean seeds will not germinate when soils are saturated because oxygen is limiting.

Saturated Soil during Vegetative Stage: Warmer temperatures will cause soybean plants to die faster. At temperatures, 80 degrees and greater, submerged soybean plants will likely due in 24 to 48 hours. However, cool, cloudy days (…and we’ve had plenty this year) and clear nights increase the survival potential of a flooded soybean crop. Flooded plants may also exhibit poor nodulation, resulting in yellow, stunted plants.

Keep in mind, the effect of plant population on yield is very small over the normal range of seeding rates. For soybeans planted in May, final populations of 100,000 to 120,000 plants/acre are generally adequate for maximum economic return. For example, in our seeding rate trials in Clark County, 100% yield (77 bu./acre) was achieved with a final plant stand of 125,000 plants/acre. However, a 95% yield (73 bu./acre) was achieved with only 77,000 plants/acre. (This trial was planted the second half of May in 15-inch row width.)