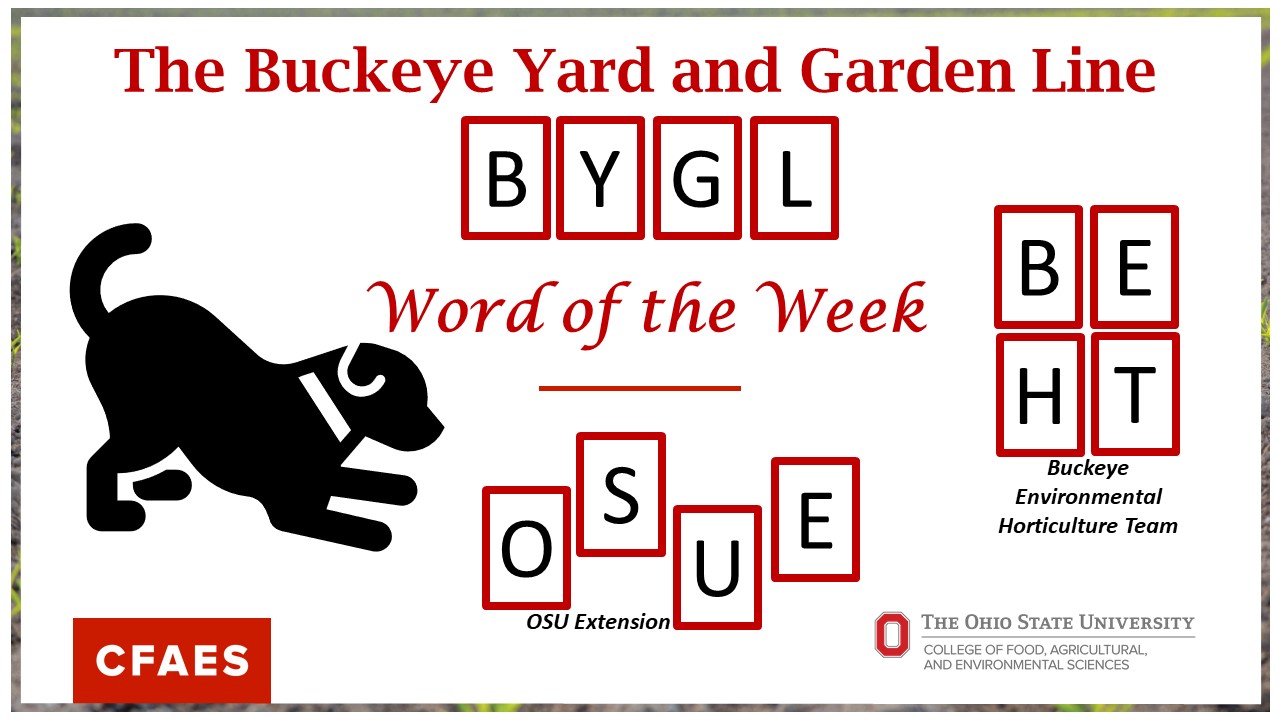 This week’s word of week was suggested by BYGL reader, Kathy Estabrook. Thanks to all readers who have suggested a word, or words for future BYGL alerts. Keep the suggestions coming by emailing me at stone.91@osu.edu with the subject line Word of Week for easy sorting and organzing.

Today will we be covering the word ALLELOPATHY. The meaning of the word is actually derived from two separate words. The first word is allelon which means “of each other”. The second word is pathos which means “to suffer”. It refers to the chemical inhibition of one species by another. The “inhibitory” chemical is released into the environment where it affects the development and growth of neighboring plants. It is important to note that it doesn’t necessarily inhibit the growth of all plants, but the effects can cause issues in both the landscape and garden when a plant giving off an alleopathic chemical is present, and you want to grow certain plants that find this biological phenomenon challenging.

The actual defination of allelopathy is the chemical inhibition of one plant (or other organism) by another, due to the release into the environment of substances acting as germination or growth inhibitors.

Probably the one of the common horticultural examples used to illustrate an allelopathic relationship is the black walnut and its ability to effect the growth of some plants near the tree or within the spread of the root zone.

Years ago I was visiting a site where the homeowner had two matching mounded landscaped beds on either side of the entrance of his driveway. He explained that the planting on the one side was doing great, but the other side was a very different story. Many of the plants on the “problematic-side” had been replaced numerous times and he could not understand why. The plants would start out ok, but quickly they would wilt, decline, and die. The soil conditions and care the plants received were the same in both beds. As I running through the possible explainations in my head while at the site, I stepped back and looked up. Guess what I saw on the side of the driveway where the mounded bed had not been performing at the same level of bed on the other side? A large black walnut tree (Juglans nigra). After looking at the list of plants that don’t fare well as a result of “black walnut toxicity,” those were also the picks of the homeowner for this landscape project.

The roots of black walnut (Juglans nigra) and butternut (Juglans cinerea) produce a substance known as juglone (5-hydroxy- alphanapthaquinone). Many plants such as tomato, potato, blackberry, blueberry, azalea, mountain laurel, rhododendron, red pine, and apple may be injured or killed within one to two months of growth within the root zone of these trees. The ‘toxic zone’ also referred to as black walnut toxicity from a mature tree occurs on average in a 50′ to 60′ radius from the trunk, but can be up to 80′. Young trees 3′ to 8′ high can have a root diameter twice the height of the tree, with susceptible plants being impacted within the root zone. Because the root sytem radiates out from the tree’s location, it is possible for a neighbor to have a black walnut or butternut tree, but you have the some of the roots, thus inhibiting your ability to grow certain plants.

As I was looking for information to include in this alert, I came across a resource from Cornell that is a ‘chapter’ on allelopathy. If you want to read more about this and the other plants that have allelopathy tendacies, I would recommend you check it out. The reference can be found at http://csip.cornell.edu/Projects/CEIRP/AR/Allelopathy.htm The chapter does include information about lab and classroom activities that might be over the top for many, but I found it to be a good source of information. Additionally, I have included some links to factsheets that you might also find interesting.

One thought on “Word of the Week – Allelopathy”