Crane flies (a.k.a. daddy longlegs and mosquito hawks) belong to the insect Order Diptera (the true flies) in the Family Tipulidae. There are some 15,000 species of crane fly throughout the world. Crane flies and mosquitoes belong to a common subgroup of the flies and crane flies do look superficially like giant mosquitoes. Crane flies fortunately do not possess the mosquito piercing/sucking mouthparts for taking a blood meal. Therefore, they do not bite other animals for blood. Some adult crane flies do not eat in their short life span or feed on liquids from plants. Adults live for upwards of 10-14 days.

The larvae of crane flies are maggots called leatherjackets because of their tough, leathery outer covering (exoskeleton). Depending on the species of crane fly, the larvae may be aquatic, semi-aquatic or terrestrial living in soils that are high in organic matter and relatively moist for most of the year. Some species can attack living plants eating root hairs, small roots, outer coverings of roots and stems, and occasionally eating leaves such as grass blades.

Adults usually appear in Ohio landscapes during two peak periods. Some species produce a heavy adult emergence in the spring while other species generate adults in the fall. Currently, parts of Ohio are experiencing extremely large numbers of newly emerged adult crane flies. These large numbers of crane flies flittering above lawns, pastures, and field crops are mostly a nuisance, and some of them can find their way into homes. 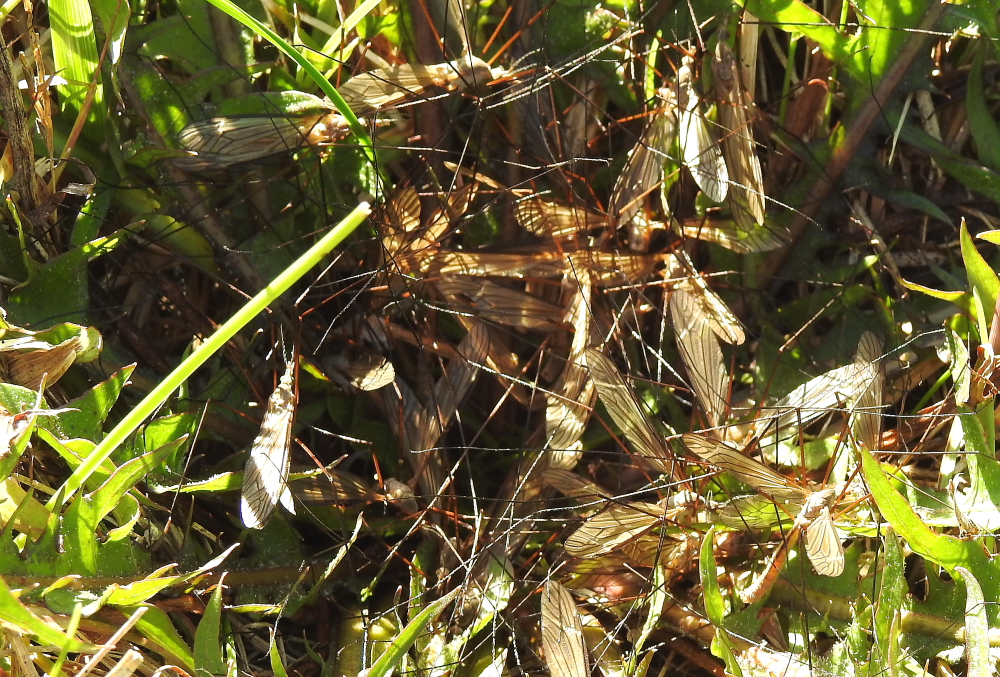 Mass of male crane flies searching for a mate.

Like the adults, the larvae occasionally appear en masse spilling onto driveways or sidewalks, especially after heavy rainfalls. Such a dramatic appearance in a landscape may signal that the lawn has a thatch problem since the larvae are particularly fond of decaying thatch. However, the native species found in Ohio cause no damage to the turfgrass.

The same cannot be said for two non-native species that have been found in the northeastern states and eastern Canada and have now spread to Ohio and Michigan. Both were accidentally introduced from Europe. Larvae of the European crane fly (Tipula paludosa), and the Marsh crane fly (T. oleraceae) feed on the crowns and blades of living grass plants. Both can cause serious damage to turfgrass. They are also known to do damage to cereal (wheat, oats, rye, barley, etc.) and other crops, and a variety of minor crops ranging from sugar beets and turnips to brassicas, berries and carrots.