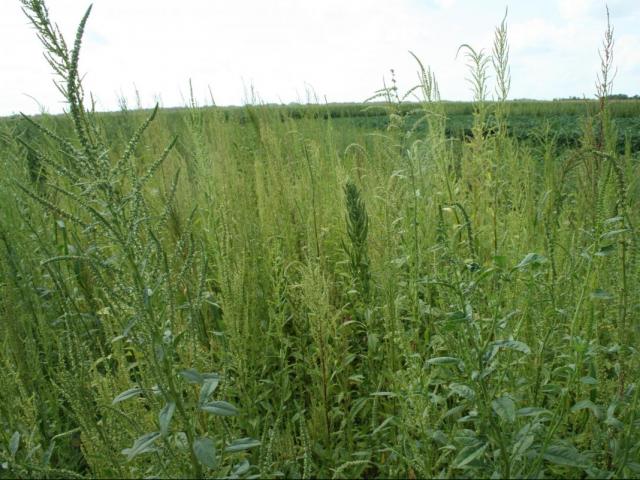 The bottom line here is that it’s essential to scout fields this time of the season and kill or remove plants that could produce seed.  Allowing even a few plants to produce seed means an increased population for the next year or two at least.  Running harvest equipment through planst loaded with seed is a primary mechanism of spread from field to field.  Plants can survive into late season because they emerged after herbicide treatments, or survived an improperly timed and less than effective POST treatment.  These plants should produce less seed than plants allowed to grow full season without interruption.  It’s also possible given waterhemp’s propensity to become resistant to any herbicide used against it, that the survivors are resistant to whatever POST herbicide was used.  Resistance to glyphosate, ALS, and PPO inhibitors is widespread in Ohio, and we expect the development of resistance to dicamba, 2,4-D, and glufosinate will occur given their intensity of use (which is why the current period of clean fields makes us nervous).  The only way to ensure that resistance does not develop is to follow herbicide programs with later season scouting and removal of plants to prevent seed.

The most effective way to prevent seed is to cut off waterhemp or Palmer plants just below soil line, remove plants from the field, and burn or compost or bury deep enough.  Plants left in the field can reroot at multiple nodes and regrow.  Another option to at least reduce seed production – use a weedeater to cut the tops of plants off.  Once plants develop mature seed (hard brown or black), most effective strategy may be to cut off and bag up seedheads and remove from field.  The value of herbicides this late in the season is questionable.  PPO herbicides are the only legal option at this point, with following restrictions (DBH = days before harvest; from Table 18 of Weed Control Guide):  Cobra/Phoenix – 45 DBH; fomesafen – 45 DBH; Ultra Blazer – 45 DBH.  Carryover and injury to corn from late-season applications of fomesafen is possible.  None of these herbicides are likely to kill large waterhemp plants although they may reduce suppress smaller plants enough to reduce seed.  Keep in mind that PPO inhibitors would be completely ineffective in waterhemp populations that are resistant to PPO inhibitors.

We suggest taking some time from now into September to scout fields for waterhemp and Palmer amaranth with the goal of preventing seed.  If you are lucky enough to have avoided waterhemp, use scouting to maintain this status and prevent new infestations.  If you are currently managing waterhemp infestations, consider late-season removal of plants as an important component of that management plan, and critical to maintaining POST herbicide utility.  Scouting should include local roadsides and waterways, and areas of fields subject to flooding or near migratory bird or deer paths.  Since combines are an effective dispersal mechanism, check the part of fields first harvested where combines are started up.  If you need to harvest fields with waterhemp or Palmer amaranth, harvest these last followed by thorough cleaning of combines, grain carts, semis, etc.  These efforts can go a long way toward avoiding future headaches and increased production costs.